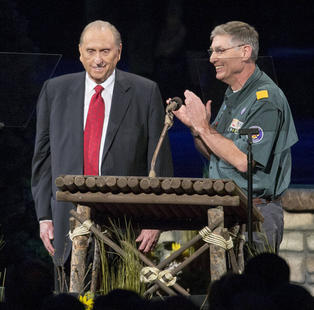 A century has passed since The Church of Jesus Christ of Latter-day Saints became the first organization to formally sponsor Scouting troops for its youth.

Since then, millions of LDS young men have worn the iconic uniform of the Boy Scouts of America. Legions of men and women, meanwhile, have served as leaders in Scout troops and Cub Scout packs.

The church's 100-year-old partnership with Scouting was celebrated Tuesday at the LDS Conference Center in an original stage production chronicling the ongoing story of LDS Scouting. The program — which was broadcast live to thousands of meetinghouses across the United States — included choir music, historical reenactments and video tributes to what church and Scouting leaders have dubbed "a century of honor."