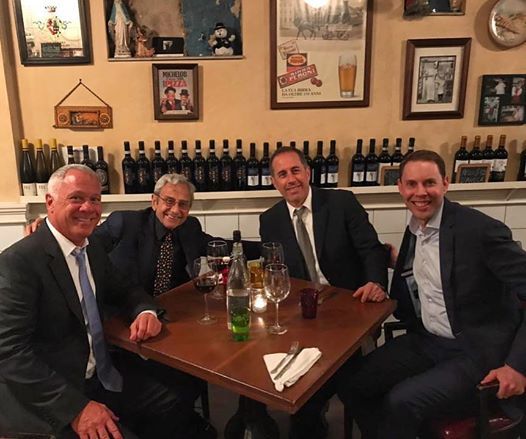 LDS comedian Ryan Hamilton recently posted something most comedians can only dream of—opening a show for the legendary Jerry Seinfeld.

"What a night!" Hamilton posted on Facebook. "Great shows, great food, and great people. What else is there? So much fun. Thank you, Jerry! I got to open for @jerryseinfeld in NYC @beacontheatre and follow it up with the best pizza I've ever had @capizzi.pizza. My face here looks like when the big kids let me play ball with them that time."

Hamilton is known for his clean sense of humor and has appeared on The Late Show with Stephen Colbert, Conan, The Late Late show, Last Comic Standing, Comedy Central, and Showtime. He was also named Rolling Stone’s "Five Comics to Watch" and has won awards for his comedy at The Great American Comedy Festival and Sierra Mist’s America’s Next Great Comic Search.

Of working as a comedian, Hamilton told The Georgia Straight that it hasn't been a problem living the lifestyle of a comedian while also maintaining his beliefs.

“People always say, 'Is it hard to live in that environment?’ But it’s not for me,” he said. “Comics come from so many different backgrounds that you can connect with a comic if you’re funny. It’s more about being funny than where you come from or what you believe. So I never really feel uncomfortable, especially around comics, in that environment, because you all have the one thing in common, which is comedy.”