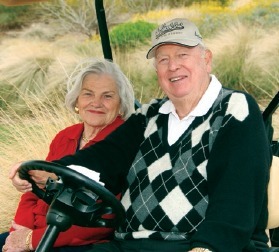 News out of Springville, Utah, confirmed Saturday that LDS golfing legend William "Billy" Casper died in his home at the age of 83. ESPN reports that he died quickly and peacefully with wife Shirley at his bedside.

Last year, Casper had passed out in the Masters's clubhouse as a result of a heart condition, which he had treated. Casper's son reported that his father was improving with cardio rehab for the past four months until his sudden decline in the past week.

Born in San Diego in 1931, Casper picked up golf as a child and went pro in 1955. By the mid-1970s, he had amassed an impressive collection of golf’s highest honors. He had 51 PGA Tour wins to his credit (a feat that still lands him seventh on the all-time list of winners), had registered 23 holes-in-one, and had twice been named PGA Player of the Year. He had won two U.S. Opens and a Masters and played for the United States in eight Ryder Cup tournaments, where he logged 23.5 points, still the best for an American player. He had captured the Vardon Trophy for lowest scoring average five times—second only to Tiger Woods—and had become the second golfer ever to bank $1 million in tour earnings.

Still, Casper went largely underrated by the general public, despite being inducted into the World Golf Hall of Fame in 1978 and the PGA Hall of Fame in 1982. Casper followed up his professional career with success on the senior PGA tour (now called the Champions Tour) throughout the 1980s. Casper’s last of nine wins on the senior circuit came in 1989. That same year he founded Billy Casper Golf with business partners Peter Hill and Bob Morris, with the vision of offering sophisticated golf course management, design, and marketing services. The company has since grown to be the second largest golf course operator in the United States, managing facilities in 27 states.

Casper’s ongoing dedication to young people was instrumental in his being awarded the PGA Distinguished Service Award in 2010.

Casper lived in Springville, Utah, with his wife, Shirley, of 62 years. He remained active in philanthropic work and enjoyed spending time with his family—11 children, 34 grandchildren, and more than a dozen great-grandchildren. Golf still factored into Casper’s life leading up to his death.

Our thoughts and prayers are with Casper's loved ones during this difficult time.

Read more about Casper's amazing life in his autobiography, The Big Three and Me:

It is a true rags-to-riches tale that began at age four on a homemade golf hole in a New Mexico pasture during the Great Depression and culminated with extraordinary success in what many consider golf's most glorious era.

The Big Three and Me is the story of a golfer, and of golf, at their finest, and one that's long overdue to be heard.