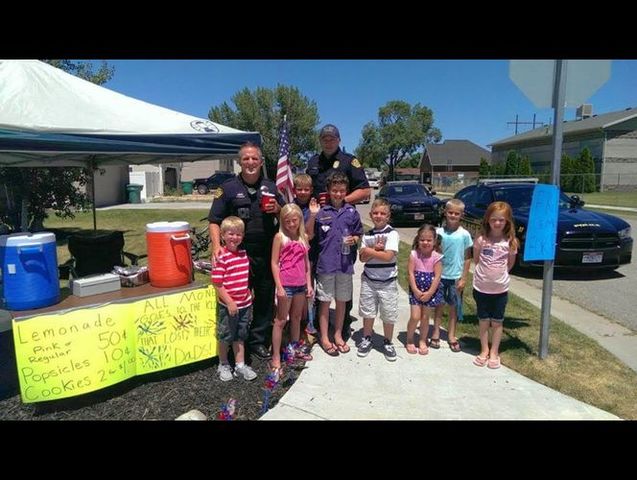 But she never imagined her sons would test that lesson with a lemonade stand destined to raise $1,000 for the children of fallen Dallas police officers.

On July 12, Kaden Kimber, 8, and Carson Kimber, 6, were playing in their Roy, Utah, home while Sherrie was folding laundry when they first heard about the Dallas police shootings on the news.

Sherrie says the boys became angry and confused about what they were seeing on TV, so she sat down with them to explain five police officers in Dallas had been killed by a sniper.

"Kaden's initially response was, 'But mom, this is America!'" Sherrie says.

Seeing her children were deeply troubled about what had happened, and wanting to make them feel like they could do something about it, Sherrie posed a question that would spark an outpouring of love and support: What are you going to do?

The boys, without coaching or hesitation Sherrie says, immediately decided to create a lemonade stand and send all the proceeds to the children of the slain officers.

"He (Kaden) told me that he felt a feeling inside that told him to do something good for other people and show others he cared, just like Jesus does for us," Sherrie says.

In order to get the supplies they needed, the boys agreed to sign a contract to clean their rooms and read for 100 days in exchange for a $100 loan from their father.

Then the boys stayed up until midnight baking 150 cookies and creating signs for their stand.

But even after all their work, they still had not served a single customer an hour after opening for business.

"Carson turns to me and says, 'Mom I think there is still too much hate right now and nobody is going to come,'" Sherrie says.

Just when Sherrie began to question whether her son was right, a friend told her to post the event on Facebook. Not long after, friends began to stop by the stand to make donations.

A few hours later, the first police officer came by the stand—then another, then another.

"You could kind of see some of the officers choke back tears and things and you could tell it was a little bit emotional because they kept saying, 'Thank you for your support. Thank you, we really needed this,'" Sherrie says. "Those words just resonate with me."

The wives of police officers also showed up, bringing pizzas and cupcakes for lunch.

More than 15 gallons of lemonade, 150 cookies, and nine hours later, the Kimber brothers had raised $862—far more than the $200 they had originally hoped to raise.

But that even that wasn't all.

After all their hard work was over, Sherrie took Kaden and Carson out for dinner at Buffalo Wild Wings.

"They told the waiters what they did and how much money they raised and they were blown away," Sherrie says. "We could tell they were super touched. They stopped everyone and called everyone over like they were going to do a birthday cheer type thing and they said, 'Hey we've got an announcement. These boys are heroes.'"

The Kimber's meal was paid for, Kaden and Carson got free ice cream, then people began giving them additional money for their stand.

But through all the excitement, the boys never lost sight of who they were raising the money for. And as the Kaden was getting ready to pray that night, he wouldn't let his parents forget either.

"He kept saying, 'The kids, what about the kids? We need to pray for all the kids," she says. "...Those are the moments that make you proud. That you know that they get it in your heart that Heavenly Father does love them and He's going to watch out for them. And he (Kaden) felt it."

The next day, another donation helped the boys reach $1,000.

And more could be coming. Sherrie says Kaden's and Carson's example has inspired others, with parents approaching her and asking if their children can also set up lemonade stands.

"We could not have done this without all the support and love," Sherrie says. "And it keeps going because we've got so many friends saying, 'do you mind if my kids do a lemonade stand? Do your boys mind if we do one too?' And we're like 'Yes! Yes!'"

Sherrie says all of the money raised from Kaden's and Carson's lemonade stand will go to the Dallas police headquarters to be given to the children of the slain Dallas officers.