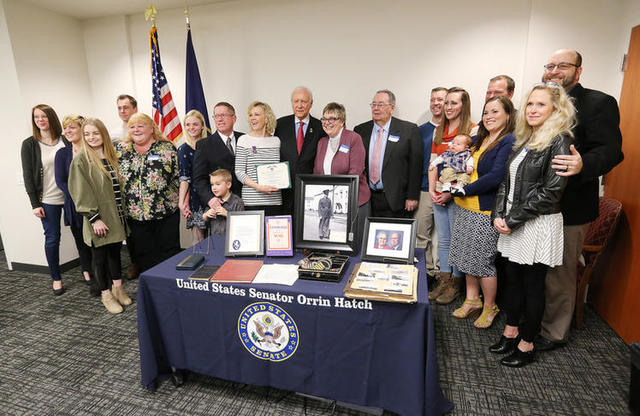 When Royce Fuhriman arrived home from World War II, he weighed only 95 pounds, an incredible contrast when compared to the 150 pounds he weighed when he left to serve as an 18-year-old. No doubt the war took a toll on Fuhriman, but he was never one to make a fuss about his service. "He never talked about the war, but as I grew up learning about the war and realizing what he went through, he's been my hero all my life," his daughter Patricia Eckman said.

After quietly returning home from several traumatic years as a prisoner in World War II, Fuhriman wanted nothing more than to marry and raise a family, shielding his four children from the atrocities he experienced until his quiet passing in 2007 at age 86.

To know that he had finally been awarded a Purple Heart, presented posthumously to his children on Tuesday, would have been "a lot of fuss," his daughter Patricia Eckman said.

"But it's very important to his family," she explained, becoming emotional.

Having joined the Army as a clerk typist at 18, the Preston, Idaho, native survived months of Japanese bombing raids to his base on the Philippine island of Luzon following the attack on Pearl Harbor.