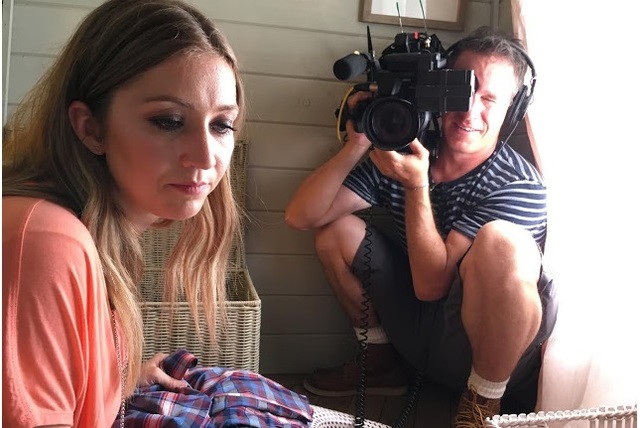 LDS Mom: How Becoming a Reality TV Star Changed Me

The following was written by Audy Leavitt, who starred with her husband Tyson on the TLC reality TV show Playhouse Masters. Read more from Audy at alwaysaudy.com.

“The constant and most recurring question in our minds, touching every thought and deed of our lives, should be ‘Lord, what wilt thou have me to do?’”

I can’t remember another time in my life where I received such bold revelation to move forward as I had when we were asked to film a reality show. Of course, I was shocked. My earthly mind couldn’t comprehend what good could possibly come from hosting a reality show.

I didn’t have anyone around me to ask for advice that had been through a similar experience. And words cannot express how inadequate I felt for the position. TV hosts should be bubbly, quick-witted, and out-going, three of the many qualities I totally felt I lacked.

So when I said, “Yes,” it was the first time I had made such a big decision while having absolutely no clue how it could work out. And that tiny-faith-seed step forward into the unknown sent me on a growth-mission toward God I didn’t know I was missing.

I had spent most of my life making sensible decisions like nursing school, marriage to my perfect man, and having three of the children I had spent my life dreaming about. I never had to question those decisions because they upheld my desires, ideologies, and good sense. But through all those life changes I had drawn closer to Christ, and I think it was time for a new kind of test. Could I follow God’s revelation when it didn’t check all the rational boxes in my finite mind? Luckily, I chose the right answer this time.

Once I moved forward, the miracles came. Even though I had agreed to film, I was still terrified of leaving my comfortable life. A few days later, some relief came in the form of a YouTube video that popped up in my Facebook feed. It was Joanna Gaines’ testimony about receiving revelation that she would one day have a platform. For her that turned out to be the extremely popular reality show, Fixer Upper, she co-hosts with her husband on HGTV.

I didn’t know who she was at the time, but I couldn’t believe I came across another woman who had such a similar experience and was able to use her reality show stage to share goodness.  It was so comforting in my time of desperation, and I started to believe something positive could come from my willingness to accept my God-given opportunity.

As time passed, we were offered several production companies to work with and each one fell through for different reasons. It was so important for us to work with a reputable company and the whole process was unnerving. When it felt like nothing was working out or moving forward and my faith began to wane, can you guess which company we ended up signing contracts with? Of course, it was High Noon, the same people who film Joanna Gaines’ uplifting, wholesome show. We couldn’t believe it.

Some might see it as a coincidence that the same crew who would be coming to film us filmed the same woman who comforted me at the height of my growing concern. I knew it was a generous blessing sent to confirm my decision because God is so very kind. This was one mercy of so many that taught me how to trust in God and showed me how graciously He pours His blessings when we move in His direction. Our crew couldn’t have been better to work with and became like family to us.

Not all the blessings were external and perhaps the greatest of all occurred inside me. My sick body was enabled to get up each day for months to work on a grueling film schedule and I actually felt healthier most days. My comfort zone seemed to grow from the outline of my own body to all four hemispheres of the earth, which was lucky since our show aired in each of them. My desires were changed so quickly and something I never wanted to do became something I loved. I learned from experience my very nature, desires, and abilities could change by surrendering my will to Christ.

This entire experience changed my course in life. I learned a little more to trust God even when the command doesn’t make sense. I have always known my earthly brain is so tiny compared to my God’s endless knowledge, but putting that truth into practice changed my heart. It was another breakthrough on my path to conversion. It made me long to shout out loud for everyone to listen, really listen to God. Not just to his commandments for all but to His individual advice for each of us. This requires us to stop, ask, and listen and then go out and do the really hard thing, because God often asks us to do really hard things. It’s part of discipleship to walk tough roads through this life sometimes but when we do, the blessings pour down, even when they’re not what we expected. And more instructions come and this upward spiral brings us closer to God and heavenly joy right where we stand.