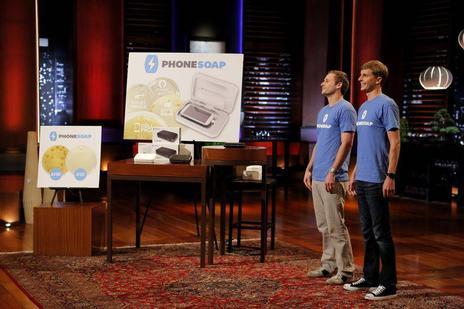 Two BYU graduates, Dan Barnes and Wesley LaPorte, appeared on a Jan. 30 episode of ABC’s “Shark Tank” and closed a $300,000 deal with Lori Greiner, the “Queen of QVC," in exchange for a 10 percent equity stake in their company. Their product, PhoneSoap, sanitizes cell phones using ultraviolet light while also charging them.

The two say that their experiences as missionaries for The Church of Jesus Christ of Latter-day Saints, Barnes serving in the Montana Billings Mission and LaPorte in the Brazil Brasilia Mission, helped them learn perseverance.

“The mission gives you confidence to talk to people about pretty much anything,” LaPorte said. “Not everybody wants to talk about religion, but that’s what you do as a missionary. Pitching PhoneSoap to not just 'Shark Tank' but other business-type competitions is the same kind of thing. It makes it less nerve-wracking.”

Barnes said their experience as missionaries has also helped them as they have worked with a variety of people.