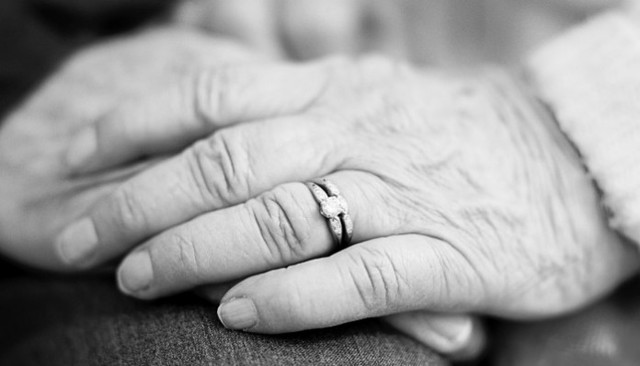 What's the story you would share if an LDS photographer asked to document and share your true love story? It's so comforting to know that, because of the temples these couples were visiting, their love will be eternal.

As a veteran wedding photographer, Jarstad enjoys hearing how young couples found each other and fell head over heels in love. In a new photo series, Jarstad documents how sweet young love only grows sweeter with age.

The series, “To Grow Old With You,” features fifteen couples that Jarstad met outside of a Latter-day Saint temple. These meetings resulted in impromptu interview and photo sessions, creating a beautiful series of inspiring love stories.

On her blog, Jarstad explains her experience with these couples, saying,

Each shared their love story with me and a few pearls of wisdom. We laughed together, sometimes cried together, and became dear friends.

Below are a few . . .  favorites from Jarstad’s series. “The story of how we met needs a little preface. Both of our grandparents were candy distributors in Provo, and our parents both catered. Following in their footsteps, we now own a catering business.”

Steve: “Though I was not acquainted with Cheryl, I grew up singing with her older brother and sister at Brigham Young High School in Provo. After high school, we both moved from Provo to different areas of California. As fate would have it, We ended up at the same dance in California. I brought a date, whom I took home early after seeing Cheryl there. I came back to the dance and asked her brother who the girl with him was. After the dance was over, I shouted across the parking lot, “You don’t need to worry about your kid sister. I will take her home!” That only worked because of my years of history with her brother.

Cheryl: “My family wasn’t very supportive of our relationship since Steve comes from a broken home. They tried to talk me out of marrying him. Having a very difficult time making decisions for myself, I let my mother influence all of them. Of course I respected my parents, but I also needed to learn to trust in the Lord. I fasted and prayed and my answer was like lightening. So, he drove all the way out to Utah from California and we decided to elope that Friday! Crazy, I know. I look back on that answer and it gives me the strength to endure any challenge.”