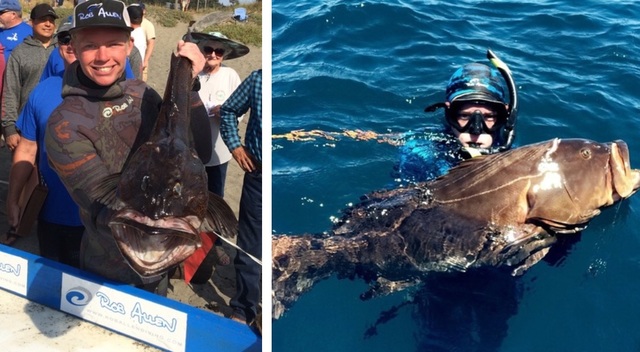 Shortly before leaving with Team USA on July 19 for the XXXI CMAS World Spearfishing Championship in Portugal, Kelston McGuire met with his LDS stake president.

Even as he prepared for the biggest spearfishing competition of his life, the 18-year-old from Grand Junction, Colorado, was submitting his paperwork to serve a two-year mission for The Church of Jesus Christ of Latter-day Saints.

In the coming weeks, McGuire expects to receive his mission call, and after the world spearfishing championship Sept. 6-10, in Sagres, Portugal, his focus will shift from fins, diving, and spearguns to white shirts, ties, and missionary work. 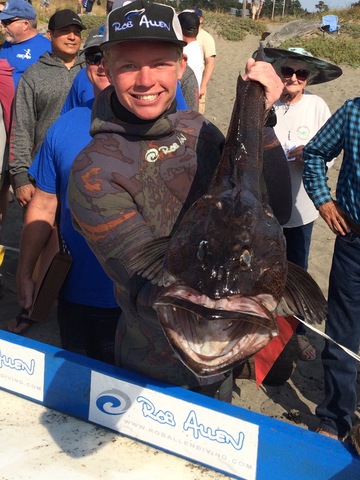 Kelston McGuire with his big lingcod at Noyo Harbor, California. Photo courtesy of the McGuire Family.

Stepping away from a sport he loves won't be difficult for McGuire, who made his decision years ago.

"I'm either for it all or not at all," McGuire told the Deseret News before leaving for Portugal. "I made the decision when I was a deacon (about 12 years old) when our leaders were encouraging us to pray and make the decision now. That's when I made the decision — you know what, I'm going on a mission."

McGuire's passion for spearfishing runs in the family. It started with his father, Mike McGuire, who grew up in California scuba diving, free diving and spearfishing with his brother. 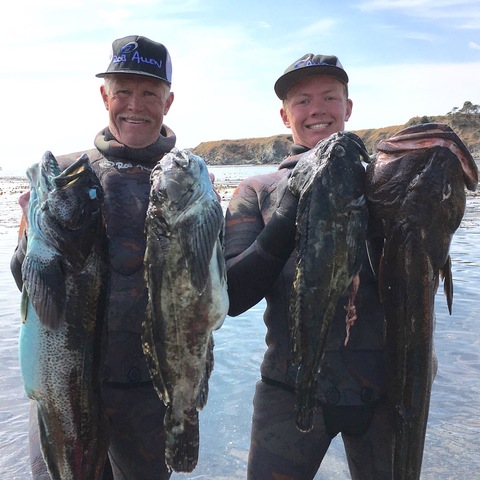 Kelston McGuire and his father, Mike McGuire, hold up fish caught during the Salt Water Nationals in Noyo Harbor, California. Photo courtesy of the McGuire Family.

From the time he was old enough to get in the water, Kelston McGuire's "toys" included fins, a mask, a snorkel, and a wetsuit.

"I started swimming lessons at 3 or 4 years old. I was comfortable in the water," McGuire said. " At age 5, my dad found this bright yellow single band, meant for a little kid, my first-ever speargun experience. I followed him around in the water."

In the years that followed, father and son joined the Rocky Mountain Spearfishing Association, one of five spearfishing councils across the United States, and participated in multiple national competitions from California to Arkansas.

In 2017, McGuire finished among the leaders at competitions at Lake Mead, Nevada; Beaver Lake, Arkansas; and Noyo Harbor, California. As a result, McGuire was selected as the youngest American for the USA World Spearfishing Team. He will go as an alternate to teammates Justin Lee, Paul Young, and Ryan Myers. If for any reason one of the other three can't dive, McGuire will dive in their place, he said.

"If you are doing well in your council you can get in," McGuire said. "In Europe, spearfishing is second only to soccer, so it's a pretty big deal."

McGuire said there are two keys to successful spearfishing—scouting and strategy. 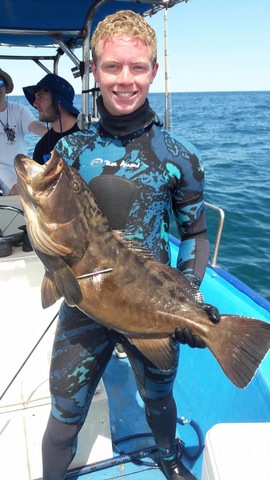 While spearfishing at Baja, California, in June, Kelston McGuire caught a 50-pound Gulf grouper. Photo courtesy of the McGuire Family.

During the month of August, Team USA will become familiar with the underwater terrain, study the fish, and prepare "all the logistics," McGuire said.

With the goal to shoot as many big fish as possible, team members must decide if they will spend their allotted time diving deeper for larger fish or staying more shallow for higher quantities of smaller fish, McGuire said.

What McGuire loves about spearfishing includes entering a curious new ecosystem, learning about the personality of each fish, and the thrill of the hunt. 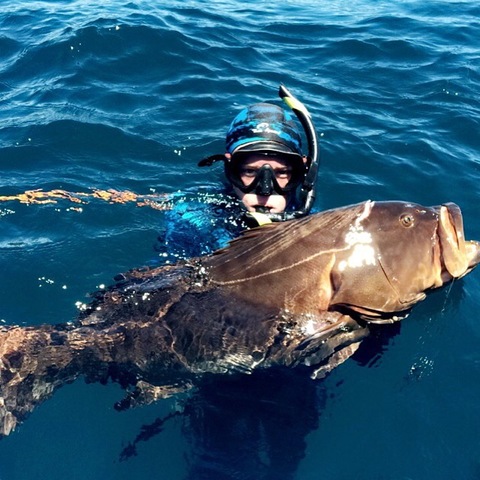 While spearfishing at Baja, California, in June, Kelston McGuire caught an 80-pound Gulf grouper. Photo courtesy of the McGuire Family.

Before each dive, McGuire prays for protection and guidance to find the fish. He is also grateful for lessons of hard work and humility taught to him by his father and spearfishing partner.

"It will be the same with missionary work," he said. "I'm going to ask Heavenly Father to lead and direct me to those souls who are prepared."

Most people can also relate to a love of fishing, McGuire said.

"It would be awesome to go to a different country. You might not be able to speak their language or understand them, but if you have any love of fishing at all, you know instantly when you meet someone else who loves fishing and you have an instant connection," McGuire said.

McGuire's parents, Mike and Stephanie McGuire, are proud of their son's decision to serve the Lord.

As a missionary herself, Stephanie McGuire took part in the opening of missionary work in East Germany—the Deutschland Democratic Republic—in 1989, she said.

"From my perspective, I was taught from my mission president Wolfgang Paul that the meaning of sacrifice is giving up something good for something better," Stephanie said. "I am grateful that from a spiritual perspective he is wanting and able to choose something better."

Mike McGuire, a convert to the LDS Church, said his son's missionary work started with him. Kelston McGuire initially waited to be baptized by his father, who wasn't yet a member, but about two years later changed his mind and was baptized at the same time as his then 8-year-old sister.

"You could say I taught Kelston my love of spearfishing and he taught me his love of the gospel," Mike McGuire said. "He would always set an example for me. He has high standards. He would never dive on Sunday. His example touched my heart."