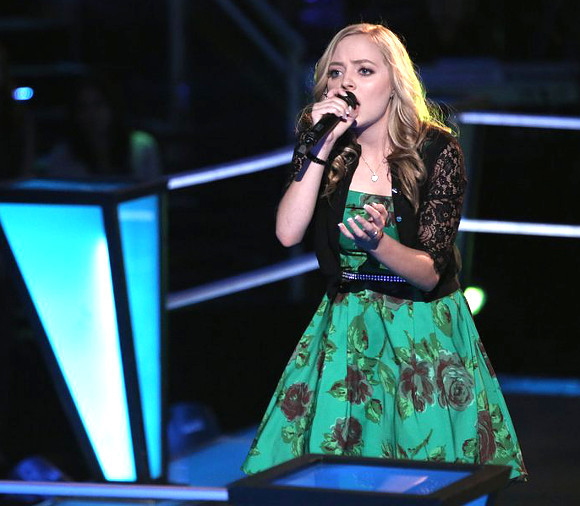 LDS Teen on 'The Voice' Stands Up for Standards

When Madilyn Paige sang “Everything Has Changed” in front of a live, international audience, her words became prophetic.  Not long ago, Paige was just another insecure 16-year-old struggling to make her way through high school.  Now, Paige is an up-and-coming musician and songwriter with a newly released single that has received a surprising amount of attention and success.

A young woman with unshakable faith, Paige gives all the credit for her miraculous transformation to her Heavenly Father.

“I have really bad stage fright before a show and I never wanted to go on TV especially,” Paige confessed.  But, when her uniquely powerful voice put Paige through to the top 20 finalists on NBC’s hit reality show, The Voice, her dreams and her fears both became vividly realized.

“I had no idea how I was going to make it through and to this day I don’t know how I would have had I not had the Lord on my side helping me through it,” Paige said.  “I was really, really blessed.”

Despite her young age, Madilyn quickly gained confidence as she not only faced but impressed judges and audiences that would intimidate even the most experienced musicians.  “Before The Voice I was really insecure and unsure about myself,” Paige admitted,  “[but] this whole experience really gave me a lot of confidence and helped me realize what I am capable of. “

Along with finding her own voice, Paige found the strength to stand for her beliefs, no matter the pressure.  When fellow contestants drank or smoked after performances, Paige refused to participate even if it might harm her popularity.  When costume designers came to her with wardrobe options, she stuck to her standards regardless of convenience.

“Luckily [most people] were really understanding,” Paige said.  “But, I definitely had to set my boundaries.”

Paige’s values gained the attention of her fellow contestants as well as noteable record companies and caused her to stand out from the rest.  Shortly after participating on The Voice, Paige signed with Highway Records where she recently released her first single, “Irreplaceable,” which you can download for free here.

This song reflects much of Paige's poignant struggles with self-doubt as well as the incredible growth she experienced this past year.  “I wrote it at a time when . . . I just didn’t feel like I really belonged anywhere and I was trying to discover myself,” Paige said.  “It definitely comes from a deep place with everything I’ve gone through.”  "Irreplaceable" released on November 1, and since that time, Paige has received nothing but support from the "Voice family" as well as good reviews from fans.

Between making music videos and preparing to release an album early next year, Paige has kept busy with her music, all the while looking forward to her developing career.  “It was a once in a life time experience,” Paige said.  “It definitely changed my life and I will never be the same.  I can’t wait to see what comes next.

But, even while she looks towards the future with optimism, Paige continues to remember her past experiences with gratitude, always giving credit to the source for which those blessings came.  “There were so many tender mercies throughout the process,” Paige said.  “I would not have made it as far as I did if I hadn’t had my Heavenly Father to rely on.”

Listen to Madilyn's powerful new single on Soundcloud or Itunes.