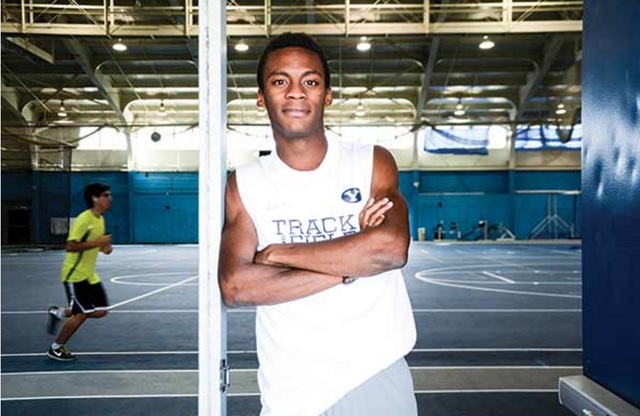 In the World University Games in Korea, LDS athlete Shaquille Walker placed first for Team USA, making him the first American to win gold in the 800 since 1976. But he hasn't stopped there.

A junior studying exercise science, Shaquille Walker went from not knowing that colleges recruited for track to becoming one of BYU’s top runners. (Photo by Alisha Gallagher)

Shaquille Walker was convinced he was a sprinter, so he got his freshman high school coach to put him in the 100-meter, and he ran against five others at Liberty High School in his home state of Georgia. He placed fourth.

“I remember thinking, ‘How are you running faster than me? I’m moving as fast as I can!’” Shaquille says. “I didn’t like how that felt.”

At the next race, he listened to his coach, who knew Shaquille’s speed and endurance could fuel him through the 800. His coach told him to run when the gun goes off and to stay with the leaders. With no concept of pacing, Shaquille did just that — and won with a time of 2:15.

Shaquille didn’t lose often after that. He advanced through the county, state and regional competitions, twice winning the 800 state championships.

That’s when things started to change. He wasn’t LDS, but he was dating an LDS girl at the time. . .