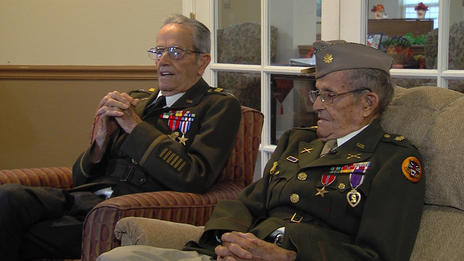 LDS Twin Brothers Heroically Fought Side-by-Side in WWII, Without Even Knowing It

MR says: Though their service took them in different directions in WWII, they often crossed paths unknowingly. Ralph Henderson earned a Silver Star and his brother Boyd a Purple Heart for their heroic efforts. Read their incredible, true story.

Not long before the Japanese bombed Pearl Harbor on Dec. 7, 1941, Ralph Henderson of Arimo, Idaho, was drafted into the U.S. Army. He was eager to serve and was sent to train in Wyoming.

But unlike so many other young draftees, Henderson, who is now 97, would be joined in battle with someone extremely close to him — his identical twin brother Boyd.