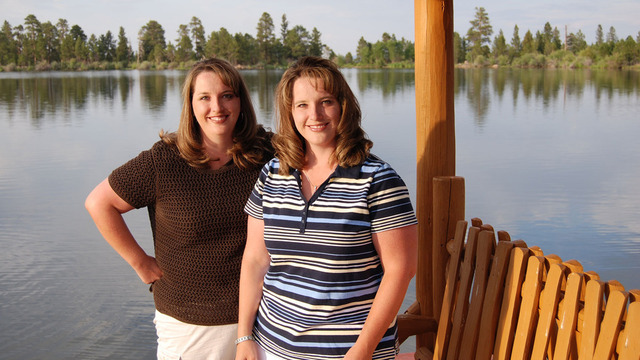 They teach at the same school. The men they married were best friends. And now, identical twin sisters Kerri Bunker and Kelli Wall have yet another thing to share.

This summer, both sisters found out they were pregnant with twins due in March. And it gets better: For each expecting mother, this will be their second set of twins. Wall has 4-year-old fraternal twins named Madison and McKell, while Bunker gave birth to Kole and Hallie three years ago.

This situation, while unique, can also be viewed as miraculous. Before their first twins were born, both Bunker and Wall struggled to get pregnant. In fact, both of their first sets were conceived through in vitro fertilization. Afterward, both women were informed that the prospects of future pregnancies were shaky. A doctor had told Bunker that without medical assistance, the odds of her getting pregnant, if they existed at all, were very low. Another doctor, upon learning of Wall's pregnancy, told her that her hormone levels couldn't produce a second set of twins.

Both doctors were wrong. "It was one shock after another all summer long," Bunker told KSL.

Bunker and Wall have embraced their twinship their entire lives. "I always felt like [Kelli] and I had a special bond," Bunker says, "and we've always looked out for one another." They are both elementary school teachers at Timpanogos Academy in Lindon, Utah, and have many of the same students (they teach third and fifth grade, respectively). When they started teaching, the school's principal couldn't tell them apart.

"There's nothing better than having a best friend with you all the time," Wall says.

Lead image from the Associated Press.