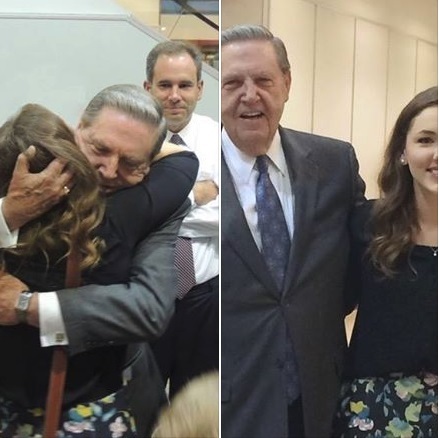 We were very excited to see this personal Facebook post from Jeffrey R. Holland welcoming home his granddaughter from her mission. This is a first for the Holland family--this is the first grandchild the Hollands are welcoming back from serving in the mission field. They also have another grandchild (this missionary's brother) who has been serving for the past year.

-->Read what Elder Holland wrote about the occasion

10 Things You Didn't Know about Your Favorite LDS Hymns

The history behind LDS hymns is rich with fascinating stories and quirky facts. Don't believe us? Just check out these fun finds about the history and form of some favorite hymns of LDS Living readers and other common conference tunes:

How Great Thou Art

Today's version of this hymn is loosely based on a German translation of a Russian translation of a Swedish hymn, "O Mighty God." In 1923, English missionaries heard the song in German and translated it from memory, and added new pieces based on the breathtaking scenery they witnessed in their travels.

However, at that time, they only wrote the first three verses.

The fourth verse didn't come until after World War II. Those same missionaries added the last verse, inspired by refugees in Britain who constantly asked, "When can we go home?" Thus, the fourth verse focuses on the joys of our heavenly home.

-->Click here for more facts, including why "Come Thou Fount of Every Blessing" was removed from the 1985 hymnal

Director of Humanitarian Services Says "This Is a Woman’s Church," Gets Standing Ovation

This speech, given by Sharon Eubank at the 2014 FairMormon Conference, was reposted on Mormon Newsroom. Eubank’s remarks addressed recent press reports that allege “the Church is sort of oppressive, or that it’s stodgily conservative, or that it might somehow be a toxic environment for women to participate in.”

-->Learn more about the video

Carlos Martins was born to a poor family in Brazil that accepted the gospel while he was still young. He learned English from the missionaries, and later served a mission in Portugal before marrying.

“We decided to seek prosperity with the help of God," Martins wrote. "We promised the Lord that we would be 100 percent faithful in paying a full tithing and that we would be generous in our payments of church offerings. As we returned to begin our life as newlyweds, we did not yet know what to do to climb out of the poverty in which we found ourselves. … We had no chart, no compass, no road map, no standards or hints. We only had the desire and confidence that the Lord would bless us according to our efforts."

We know you're busy--and that kids are picky! Which is why this week, Slow-Cooking Fast! brought you 6 easy and delicious crockpot recipes your kids will love! And, as a bonus, each recipe includes a veggie so you can feel good about feeding your family right.