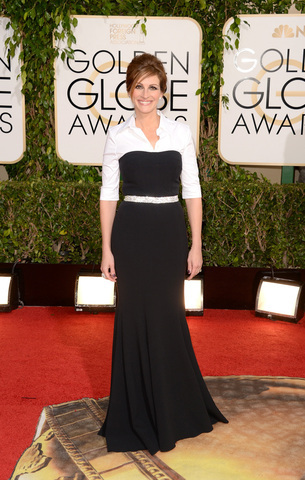 A new temple film in addition to the one released last year is now being phased into rotation. English versions of the second new film, which has no script changes, are being sent out to temples in the next few weeks, with translated versions to follow in the coming months.

Church spokesman Cody Craynor is quoted as saying, "As with previous films, this second instructional presentation is rotated with the film released this past July to give variety." Just another great reason to attend the temple if you haven't in a while.

2. 15 Modest Dresses from the Golden Globes

This blog reached almost viral status on our site with more than 30,000 views--and just as many opinions about its content. The photo gallery, which aims to inspire LDS women with modest and near-modest fashion examples from celebrities at the Golden Globes awards this past weeked, has stirred the "modesty" pot and sparked quiet a lively debate in the comments section at the bottom of the post. No matter where you stand on the celebrity-modesty-dress issue, it's a must-read.

With the Gilbert Arizona Temple open house now in full swing (public tours started today), the first images from inside the Church's newest temple have been released after a media viewing Wednesday. Click through to the story to see the full gallery.

If you're interested in attending the open house, it runs through February 15th--reservations are recommended. The dedication will follow on March 2nd.

At a youth conference in Arizona with over 3500 attendees, member of the all-star speaking cast Mitt Romney took to the stage with LDS singer Alex Boye in an unscriptured moment not soon to be forgotten: the pair both got down and boogied! (Well, to be more accurate, Boye got his moves on and Romney just tried to keep up!) An 18-second clip of the adorable moment surfaced on the internet a few days later--you have to watch this:

5. 10 Fascinating Facts from the Old Testament

Do you know why Adam named his wife Eve? Or what "manna" means in Hebrew? What's behind the symbolism of the almond tree? Explore the Old Testament with acclaimed LDS scholar Kerry Muhlestein as he reveals ten fascinating facts you didn't know about the Old Testament, such as:

"Esther is the only book of the Bible that does not mention the name of God. This is probably intentional as it helps convey one of the main themes of Esther. It is just one device the author uses in order to highlight that while we may not always see the hand of God, nor understand His plans or timing, He is present and directing affairs to work of the good of His people."