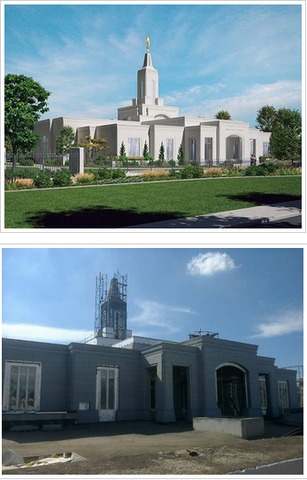 With 15 temples around the would under construction, 2 being renovated, and 14 more announced, there's a lot going on in the world of LDS temples. We peeked at the contruction status for just 5 of these 31 temples in transition: the Córdoba Argentina, Fort Lauderdale Florida, Philadelphia Pennsylvania, Sapporo Japan, and Trujillo Perú Temples. Pop over to the full article to see pictures and read current projects for each of these, or get current information on the status of all temples under construction at LDSchurchtemples.com.

10 Things Your Teens Should Know Before Leaving Home

When you're seeing your missionary off at the MTC or unpacking your brand new college student in her dorm, that isn't the time to be going over first aid skills and how to do laundry. Check out this helpful list of 10 things you should be teaching your teens now so that when the time comes, "goodbye" might not be quite so scary--for both of you.

Some highlights: learn house repairs, keep a budget, practice meal planning and cooking, and know how to clean everything from the baseboards to the ceilings (cleaning checks are right around the corner!). Get all our advice in the full article.

Did you know that Martin Luther King, Jr. owned two copies of the Book of Mormon? He also once gave a speech a the University of Utah!

One comment on the article we received by user RegentsBlue gave additional, fantastic insight into this amazing man and his understanding of Mormons:

"When Dr. King came to Utah to speak at the University, two student body officers picked him up at the airport and were his escorts for the evening. I was one of them.

I asked him what he thought of it. He said it is a great book, that he had read it and that reading it had brought him great respect for the Church. My companion, Sue, and I told him that we had prayed for him, for his lecture. He thanked us and said he was grateful, even moved that two young students would think to pray for him. I said that he must know that millions of people were praying for him, and for his non-violent movement.

His speech was inspiring and, for me, unforgettable, as was his gracious and gentle manner with us. He blessed us for our youthful efforts to stand for the right.

I have been in the presence of Church presidents, one of whom was my great-grandfather, and of apostles. The feelings I experienced with Dr. King in those few hours, were very much the same. I felt, and believed, that this good man put God first in his life, and that his hope was that every God-fearing person would be willing to do the same."

Funny Things Only Mormons would Understand

LDS Smile is at it again, and this week they brought us two great lists of captioned GIFS: Part one - 13 Funny Things Only Mormons would Understand and Part two - 10 (More) Funny Things Only Mormons Will Understand. Each list is composed of GIFs (short repeating video clips) and captioned with a funny LDS statement to give it context. And man, are they hilarious! Check out this great one from the first list:

How we feel coming home from 9 o'clock church.

Get ready for some laughs and check out both complete lists.

Before the 49ers and the Patriots each lost their chance to play in the Super Bowl, there were four Mormons among the final four teams who could have made it to the big game. Now that the Super Bowl teams are set for the big game happening on February 2nd, we’ve only got one Mormon that’s headed for the Sunday showdown: Darrell Bevell. This LDS offensive coordinator was hired by the Seattle Seahawks in 2011. This footballer used to play for Wisconsin as their quarterback back in the day. Regardless if you watch the Super Bowl or not, it’s interesting that at least one Mormon will be on the sidelines.

And in case you missed the news, one very funny LDS man has created a commercial for the new Doritos Super Bowl television spot. His commercial, "Office Theif," is one of five finalists that you can vote for to show during the Super Bowl. We died laughing at this one, so it's definitely got our vote!