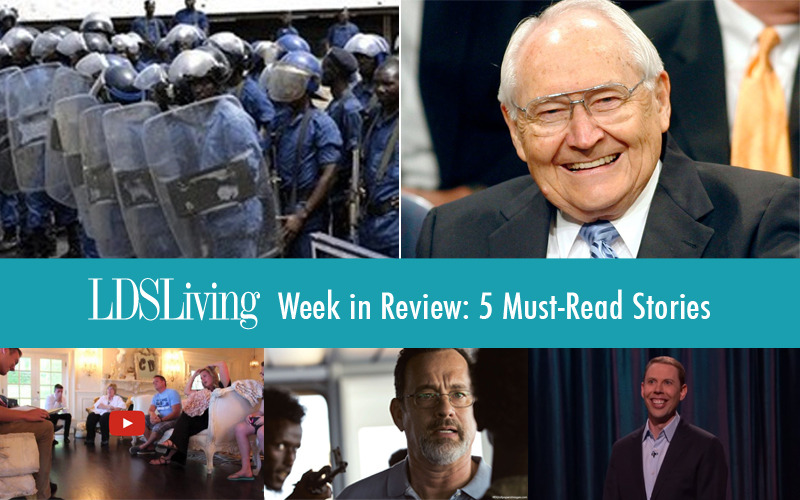 "Elder Perry was preceded in death by his first wife, Virginia Lee, with whom he has two daughters and a son. Virginia Perry died December 14, 1974. He is survived by his wife, Barbara Taylor Dayton, whom he married in 1976."

In the release, Elder Cook is quoted as saying, "That warmth, that graciousness, the fact that he really did like people and he liked all the members of the Church and appreciated them — I think that's how he'll be remembered."

We love Elder Perry, and will never forget his time spent here on earth helping each of us.

-->As well as 5 heartwarming stories shared at his funeral

Church Moves Missionaries Out of African Nation Due to Unrest

The LDS Church moved missionaries out of Burundi as anti-government protests led troops to fire bullets and teargas into neighborhoods roiled by a constitutional crisis.

-->Find out more information about the situation here.

-->For more of the week's awesome missionary stories, click here!

The harrowing story was portrayed on the big screen in the movie Captain Phillips, starring Tom Hanks. Actor David Warshofsky plays Perry in the film.

Perry risked his life by subduing one of the pirates and helping disarm him. That pirate was eventually used as a bargaining chip by the ship's captain, Richard Phillips, who was captured along with another crewmember in the first minutes of the attack.

LDS Comedians Who Prove Clean Jokes Can Be Hilarious

Hamilton’s huge smile and self-deprecating humor have charmed the audiences of Comedy Central, Conan, and The Late Late Show in recent years. His clean brand of comedy often includes references to dating struggles and his choice to abstain from alcohol.

-->To watch hilarious clips from the others, click here!