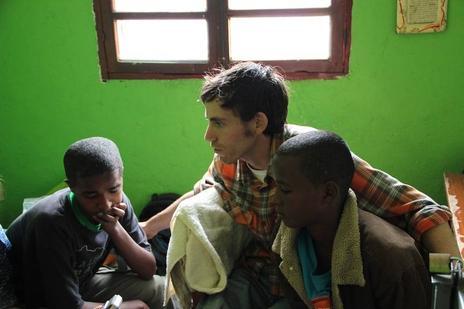 It’s lunchtime at the Yehiwot Reay compound in the Megenagna District of Ethiopia’s sprawling capital city, and a mob of gangly boys scrambles for seats at a worn wood table. They dive into plates of injera and shiro, 12 hands ripping at the food. The room reverberates with dinner-table chatter in three languages.

They are as young as 6 and as old as 20, though most can only guess at their age. And like boys anywhere, they push and scrap, argue and pout. Two of the older boys toss a ball across the room, goading each other to see who can hurl it harder.

One of the youngest, Tareku, plays music videos on a laptop computer — a technological incongruity in this meager brick and plaster home. The skin on his forearm is cracked and disfigured — an eight-inch sleeve of scars. He glances away from the screen and to his arm.