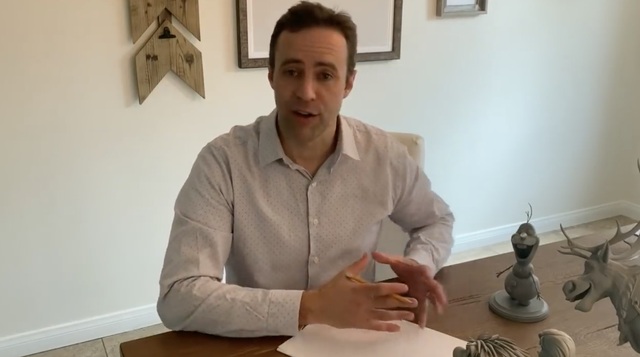 In a video released by Walt Disney Animation Studios in March, Osmond introduced himself as one the supervising animators for Frozen. He has become known far and wide as the man behind the creation of Olaf, the lovable snowman in the animated movies that have taken the world by storm. But if you watch any video or read any interview with Osmond, you will note that he is always quick to make it clear that Olaf was a team effort.

“There are a team of amazing artists that all work together to really create this character and I was just fortunate enough to be able to lead that and help kind of define who Olaf is,” Osmond says in a video where he teaches viewers how to draw the character.

But since the world shut down back in March, Disney has released over 20 videos in a series called “At Home With Olaf,” and almost every one of them has included the following in the video description: “Created at home by Hyrum Osmond. Voiced from home by Josh Gad.” And Gad himself, who is known as the voice of the beloved character, has repeatedly identified Osmond as the man behind the magic.

Here’s a behind the scenes look at me recording new Olaf dialogue from home for #AtHomeWithOlaf in conjunction with @DisneyAnimation led by @mrhyrum and the geniuses all working from homes to bring these new shorts to life. Also, guys, I’m now a sound engineer too!! pic.twitter.com/9Yl6rsx1m3— Josh Gad (@joshgad) April 6, 2020

Last month, Osmond, a father of four and the son of Virl Osmond, was interviewed by Entertainment Weekly about how “At Home with Olaf” came to be. He explained that he pitched the idea of exploring what Olaf does “when he’s not saving the world with Anna and Elsa,” long before all of us were also “at home.” He received the blessing of Frozen’s director, Jennifer Lee, and Clark Spencer, the president of Walt Disney Animation Studios, to create proof-of-concept and storyboards for episodes that would eventually become digital shorts on one condition.

“I had to do it myself. There were no resources for me. They said, ‘Just go.’ And I did. . . . Then everything changed.” As COVID-19 began to affect normal workflow, Osmond’s team has rallied around the “Olaf at Home” shorts which have garnered 8.7 million views in just over a month and the videos have become complex as he has added more help behind the scenes.

But even from the first video, people loved the series. One comment on YouTube with 893 likes says, “The fact that this quality is made at home is mind boggling.”

Osmond told Entertainment Weekly that while working from home has its challenges, he is glad the series has found success.

“It’s a very interesting time right now, especially with four kids running around. It can get a little loud and distracting. But it is working and I’m grateful for that,” he says.