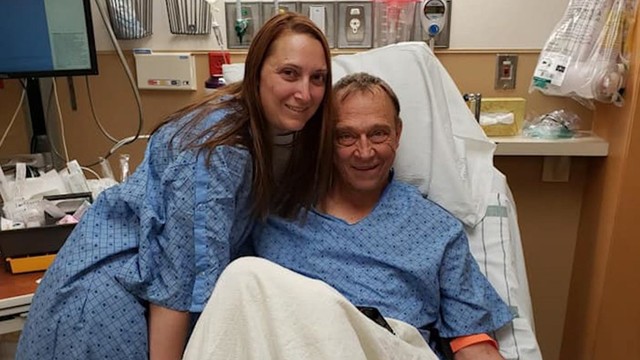 For 15 years, Latter-day Saint Gary Wayman has been battling a genetic kidney disease. Despite two previous kidney transplants, the disease continued its relentless assault on Wayman's body, threatening his life.

But for Father's Day, Wayman received a gift that brought new hope. Shaleen Martel, Wayman's daughter, was a match for a new kidney.

According to a Facebook post by Wayman's wife, Shauna Wayman, Martel had a prompting in January to be tested as a match for her father even though doctors warned her that the disease was genetic and donating her kidney could put her own life at risk later in life.

However, Shauna showed no signs of the disease, and in April, doctors called to tell her if she traveled from her home in Wisconsin to Utah, she would complete the testing in one day, according to the Facebook post. Arriving on Easter, Shaleen kept the true reason for her visit a secret.

"I hadn’t told my family because I didn’t want it to be another heartbreaking thing . . . only to have it taken away again," Martel said, according to the Deseret News.

Previously, 40 people had offered to donate one of their kidneys to Gary. None were a match, however. And so Martel knew when she walked into the hospital doors to be tested there was a chance her kidney could not be donated to her father.

"At the end of the day, she was told she was compatible. It would take a week for results to come back of the [crossmatch] test to see if she was compatible enough to be his donor, a perfect match," Shauna shared on Facebook.

Martel then asked her father to drive back with her to Wisconsin under the premise of helping Martel with her three children for a week. During this time, she hoped that if she received the results and they were a match she could share the news with her father in person.

In an emotional video below, Martel shared the news with Gary, presenting him a gift that included a kidney-shaped pillow and the results.

On June 17, one day after Father's Day, Gary Wayman and Martel underwent the transplant at Intermountain Medical Center in Murray, Utah, according to the Sanpete Messager.

“It is not all cupcakes and roses after the surgery, but it’s worth it to have my dad a few more years,” Martel said, according to the Deseret News.

For the next month, Gary will undergo tests to make sure his body doesn't reject the new kidney. According to Sanpete Messager, he plans on returning to work as a teacher at Manti High School in January.

“We are thrilled to have another new lease on life,” Shauna said, according to the Sanpete Messager. “The one thing that has kept us going through all this turmoil is a positive attitude. Gerald has always had a positive attitude; he is able to take what comes at him in stride.”