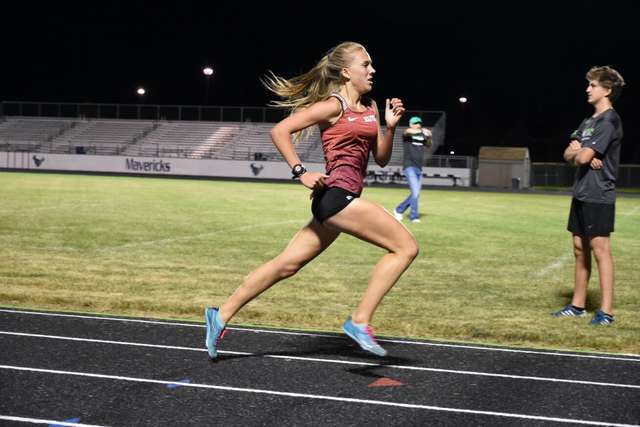 The FitnessGram pacer test is a multistage aerobic capacity test that progressively gets more difficult as it continues.

Also called the “beep test,” it is a series of timed 20-meter sprints designed to measure one’s cardiovascular fitness. Only those who finish each 20-meter run before the “beep” may continue the test. Each successfully completed sprint adds to the participant’s score.

For many P.E. students, it’s the stuff of nightmares.

For then-sixth-grader Lexy Halladay, the pacer test was just another opportunity to compete and win.

Playing on a middle school club soccer team, Halladay and her teammates lined up for the test, and, just like in many competitions since then, she not only beat the other girls but broke a record along the way.

So began an incredible journey for Halladay, who only a year later as a seventh-grader ran 1600 meters in 4 minutes and 53 seconds at a middle school track meet, a high school state record at the time.

Both feats served as demonstrations of not just the speed but also the competitive fervor that makes the current senior-to-be one of the top high school distance runners in the United States today.

Halladay was running through high school records several years before her enrollment at Mountain View High School in Meridian, Idaho, and now that she’s there, she’s made the most of her time.

Not many people can truthfully say they hold a national record. And even fewer still can claim they beat an Olympian to procure one.

But on June 2, 2017, Halladay did just that, winning the Adidas Dream Mile as a high school freshman and breaking Olympian Mary Decker’s freshman mile record of 4 minutes and 42 seconds in the process. Halladay’s time was 0.2 seconds faster than Decker’s, whose national record had stood for over 40 years.

“I just went in and stuck my nose in the middle of it, and I ended up winning and getting the record, which was super exciting,” Halladay said.

The victory capped off a dominant year for the freshman during which she won two state titles in track in the 1600-meter and 3200-meter races. She also ran away with the 5A state title in cross country in the fall.

The near-sweep of the year’s competitions led to national attention and accolades for the young athlete, but the next year would test Halladay in unexpected ways.

Halladay’s sophomore year picked up where she left off.

Cross country went as planned, and she added another state title to her list of accomplishments. However, winter training in between cross country and track seasons changed everything.

Pain in her right leg caused concern, and the diagnosis of a stress reaction in her femur was heartbreaking for an athlete who had done everything she could to stay healthy. The injury kept her from running for over a month, and she missed the beginning of track season as a result. 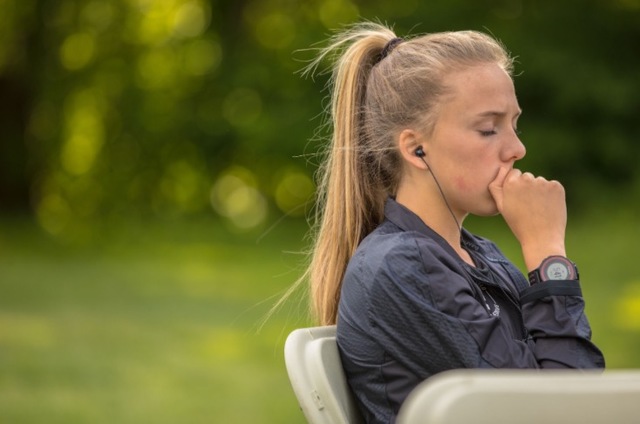 “The hardest part was mentally staying positive,” Halladay said, “just because you finally get running again . . . and then another one would develop. Yeah, it can be really rough mentally.”

Halladay relied on cross-training to keep in shape until she was healthy enough to run again.

“Oh, I love running,” she said. “That’s one thing that I hate about cross-training. Running is so fun! I would so much rather be running. When I am able to run with the team, or even just by myself or with my brother, I just get almost jittery right before we start running because I’m like, 'Oh my gosh, I get to run. Let’s go!’”

With the altered workout routine, Halladay slowly recovered and worked her way to elite running form, and expectations were high heading into the climactic end of the track season.

“Lexy was the favorite going into the [state championship] meet in the 3200, 1600, and 800,” Jenn Halladay wrote. “She had not been beaten by a local runner in these events.”

Just weeks before the meet, however, Halladay began experiencing pain again, this time in her lower left leg. She would later be diagnosed with a stress fracture but not until after the state championship meet. She ran anyway and managed to win the 3200-meter but came in second in the 1600-meter and 800-meter events.

“What most people didn’t see or know was after each of these races she would try her hardest not to limp as she went off by herself to cool down so nobody would see,” Jenn wrote.

For most athletes, winning one state title and coming in second in two other events would be a phenomenal year. For Halladay, it was a disappointment.

“Losing the state 1600 was definitely the worst out of it all, just because that is my favorite event," Halladay said. “And that race, honestly, motivated me for the whole next year, just to, you know, train harder, smarter, and to come back and run a faster time and win.”

Halladay’s struggles with injury didn’t end as a sophomore but rather continued into her junior cross country and track seasons.

“Lexy ended up with three more stress reactions/fractures in her tibia (two on her left and one on her right) over the next 15 months,” Jenn detailed. “Through it all, she stayed the course and did not give up overcoming this adversity but spent a lot of time on the elliptical machine and bike.”

While she was forced to pedal, her competition was busy running.

“I go to those [national] races and they tell me that they run 50 miles a week or even just 35–I would kill to run 35 miles a week,” Halladay said.

Cross-training, in Halladay’s eyes, is a much inferior training activity when compared with actually running. 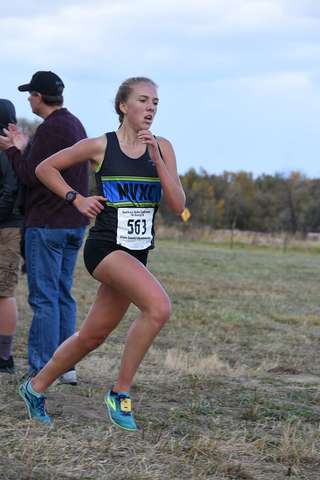 And she literally has, injuries and all. Her junior year she accomplished her year-long goal of reclaiming her 1600-meter crown. She also won the 3200 and 800 and captured her third 5A state cross country crown as well.

In terms of state titles, it was her most successful season yet.

“As hard as it was to watch her struggle, it has been amazing to watch her turn these moments of adversity into triumph,” Jenn wrote.

Running with a Plan

Halladay understands the importance of a plan.

“You always have to go in knowing what you’re going to do so you’re not in the race thinking like, ‘Huh, I wonder what I’m going to do this lap,’ or how fast I need to be going, or who I should be running with. There’s a lot more going on than just people running,” she said.

And whether it's a new training regimen or a plan for a specific race, once she’s committed to it or told somebody she’s going to do something, she follows through.

“She follows your instructions,” said Tim Severa, a family friend and a former coach. “She doesn’t doubt what you ask her to do. She’s just a very genuine person.”

Fittingly, life is often compared to a race, and as a member of The Church of Jesus Christ of Latter-day Saints, Halladay understands that God has a plan for her life, even if she isn’t privy to it.

“Lexy knows her Heavenly Father,” Jenn wrote. “She has depended on Him from the very beginning of this journey and has received help and comfort through it all.”

In a moment of frustration because of her injuries, Halladay approached her mother with a question, right before the district track meet her junior season.

“With tears in her eyes, she asked me what more could she do? The only answer I could think of was to tell her to continue what she is doing, have faith, and know everything will work out how it is supposed to,” Jenn wrote.

“One of the most peaceful moments we had together before state was in the Meridian Idaho Temple. Lexy needed to feel peace, so the evening before her first state race, the 3200, we went and did baptisms for the dead. This is what she wanted to do. She desired a moment away from the world. Doing this type of service puts a different perspective on everything you do because not only did we both feel peace because we sought it out and asked for it, but we received answers to our prayers and knew everything was going to be okay, and this is what it is really all about.”

Halladay also sought a blessing from her father before districts, saying:

“I was basically unable to run in the weeks leading up to state, and I was so mad and just so angry because I had finally been able to get into shape for state. The whole year my one goal was to win the 1600. . . . One night I just started crying, and I went up to my dad’s room, and I was like, ‘Dad, I need a blessing.'”

The message Halladay needed was delivered in a New Era article about Tony Finau dislocating his ankle during a pro tournament but finishing anyway. Halladay felt Finau went through exactly what she was experiencing, which gave her hope.

“I just was so relieved because I was like, ‘Okay, I got my blessing; now all I have to do is just trust that the Lord will let me run, and I just have to do everything I can,’” Halladay said.

A Chance to Make History

During Halladay’s three years at Mountain View High School, she has collected nine state titles, six in track and three in cross country, plus additional honors.

Among the many awards given to top high school athletes, the Gatorade Player of the Year is one of the most prestigious.

The honor is presented on both the state and national levels to recognize athletes from eight different sports based on three criteria: athletic excellence, academic achievement, and exemplary character.

The Kuna native has been honored four times as the Idaho Gatorade Player of the Year, twice for cross country and twice for track and field. And she hopes to add to that number during her senior year. 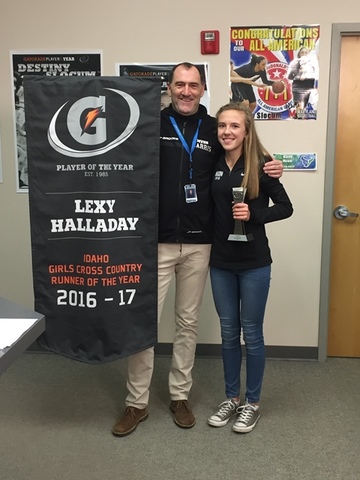 Additionally, no girl in Idaho history has ever won four consecutive state titles in cross country.

Halladay has a chance to become the first.

Despite the awards and fanfare, Halladay knows the results will work themselves out, and she is only responsible for controlling what she can.

“That’s one thing that I love about running in general,” she said. “It’s all you. You know, you line up to race and there are no officials that can make calls or coaches that won’t play you. It’s all you, and you can give it whatever you got.”