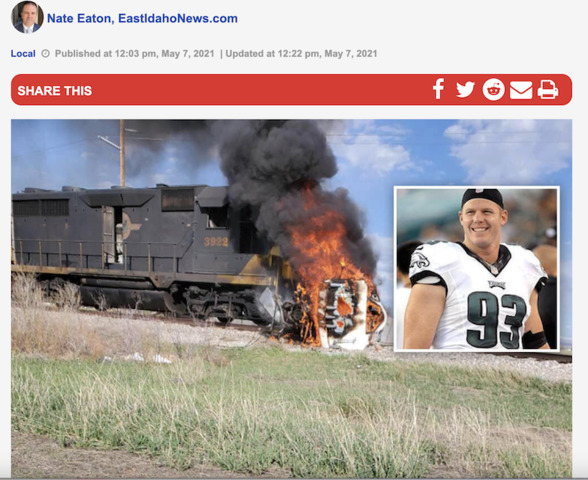 Latter-day Saint and former NFL player Brandon Bair doesn’t consider himself to be a hero. He just happened to be in the right place at the right time.

Last week, Bair witnessed a collision when a train hit the side of a semi-truck in St. Anthony, Idaho. The 25-year-old driver of the semi-truck, Steven Jenson, was pinned inside.

In an interview with East Idaho News, Bair said he called 911 and drove down the median to get to the scene of the accident. Running across Highway 20, Bair saw conductors getting out of the train. They warned him not to go near the truck which was burning in the flames.

It was then that Bair heard a voice from inside the cab and acted quickly, rescuing the driver before the entire cab went up in flames. He recalls hearing a couple of loud booms and explosives shortly afterward. When emergency responders arrived, Jensen was airlifted to Eastern Idaho Regional Medical Center, and on Friday, May 7, a hospital spokesperson said he was in fair condition.

Bair insists that anyone in his shoes would have done the exact same thing.

“All I can say is this guy was supposed to live. I’m a man of faith, and I’ve learned to listen to your gut and the promptings you get,” he told East Idaho News. “The Lord wanted him alive. Things could have gone different, a million different directions, but things worked out on his behalf. That’s my conclusion. Whether it was me or someone else, he was supposed to live.”