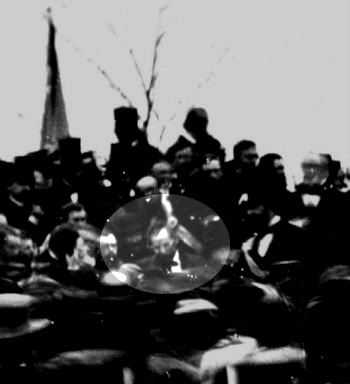 Lincoln and the LDS Church

On November 19, 1863, U.S. President Abraham Lincoln delivered what would become one of the most famous speeches in American history: the Gettysburg Address.

One of three known photos of Abraham Lincoln at the dedication of the Soldiers' National Cemetery in Gettysburg, Pennsylvania, on November 19, 1863.

Lincoln spoke for only three minutes near a battlefield in Pennsylvania where an estimated 10,000 men perished. His speech consisted of just 272 words, including the statement that the “world will little note, nor long remember what we say here.” Little did Lincoln comprehend the impact his words would have throughout the world. In honor of this remarkable speech, here are some interesting facts about the president and his interactions with the Saints.

1. Abraham Lincoln mentioned Joseph Smith in a letter to his law partner John T. Stuart, dated March 1, 1840. He wrote, “Speed [another close friend] says he wrote you what Jo. Smith said about you as he passed here. We will procure the names of some of his people here and send them to you before long.” Stuart was a member of Illinois’s congressional delegation. The Illinois delegation had assisted the Prophet Joseph and his legal counselor Elias Higbee in their efforts to seek compensation for the Saints' losses in Missouri the previous year. Click here to read a fascinating comparison between Joseph Smith and Abraham Lincoln (though the two never met in person).

2. In 1844, the year Joseph Smith ran for president of the United States, Lincoln campaigned for the Whig candidate, Henry Clay. Neither candidate was successful.


3. When Lincoln was elected president in November 1860, the news wasn't well received in the Utah Territory. Brigham Young considered Lincoln one of the "cursed scoundrels who sought our destruction from the beginning," and blamed him for doing nothing to stop the persecution of the Saints in Illinois.

4. On October 18, 1861, when the Pacific Telegraph Company was completed from the East to Salt Lake City, Brigham Young sent a message to Lincoln. It stated, “Utah has not seceded but is firm for the constitution and laws of our once happy country.”

5. On November 18, 1861, Lincoln asked the Library of Congress to send him a copy of the Book of Mormon. He also requested three other studies of the Mormons in an effort to understand the Saints better.

6. Lincoln signed an anti-polygamy bill in 1862, which further damaged relations with Utah. But when he did nothing to enforce the law, relations between Lincoln and Utah began to improve. Lincoln reportedly told an emissary the following: "When I was a boy on the farm in Illinois, there was a great deal of timber on the farm which we had to clear away. Occasionally we would come to a log which had fallen down. It was too hard to split, too wet to burn, and too heavy to move, so we plowed around it. You go back and tell Brigham Young that if he will let me alone I will let him alone."

Fun Facts about the Gettysburg Address

- Though we call Lincoln's text the Gettysburg Address, the president's contribution to the  dedication of the Soldiers' National Cemetery was simply labeled "remarks."

- Lincoln was not the  main speaker at this event. Edward Everett, one of the great orators of the day, spoke for two hours before Lincoln gave his brief speech.

- There are five surviving copies of the Gettysburg Address written in Lincoln's handwriting, and they all vary slightly. To compare the five versions, click here.

- Contrary to legend, Lincoln did not write his speech on the back of an envelope on his way to Gettysburg. The speech was, however, definitely written by Lincoln himself.

The Mormon Tabernacle Choir’s Music and the Spoken Word Veterans Day broadcast not only honored those who have so nobly served our country but also commemorated the 150th anniversary of President Abraham Lincoln’s Gettysburg Address. Watch a performance from the broadcast below.