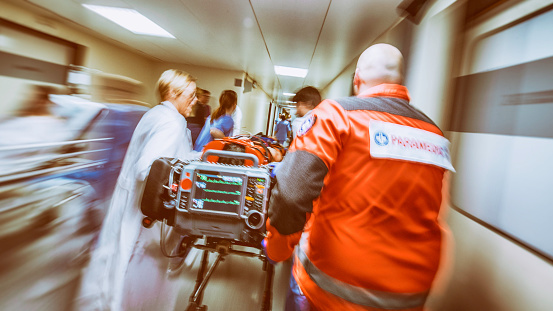 Listen: "Do Any of You Have the Priesthood?" The Call This Paramedic Will Never Forget

Over the decades, the details of various calls Steve responded to as a paramedic have faded or even disappeared from his memory.

"But the feeling remains," he says on an episode of the This Is the Gospel podcast.

And at the beginning of his paramedic career, Steve was called to respond to a call that was nothing short of miraculous.

It was some kind of auto accident and a bad one, Steve says in the podcast. He and another paramedic were there to provide advanced medical support to the EMTs already stationed there.

And as soon as Steve stepped off the fire truck onto the scene, he was immediately introduced to the gravity of the situation.

"One of the EMTs comes walking up to me with an unconscious, unresponsive little girl, and she's probably about 3 years old," Steve says. "And he basically hands her to me like, 'I can't fix this. Can you?'"

Immediately, Steve says he was "locked in." Compartmentalizing his feelings and his emotions, he became all business as he analyzed the situation and began following the procedures he had just recently learned.

Amid the flurry of activity happening as Steve and his partner desperately worked on this little girl, the ambulance doors opened.

"There's my captain trying to hold back this woman," Steve says. "And she is clearly the mom of this child. She looks me right in the eye and she says, 'Do any of you have the priesthood?'"

Listen to the rest of the episode below or click here to read what happens next.