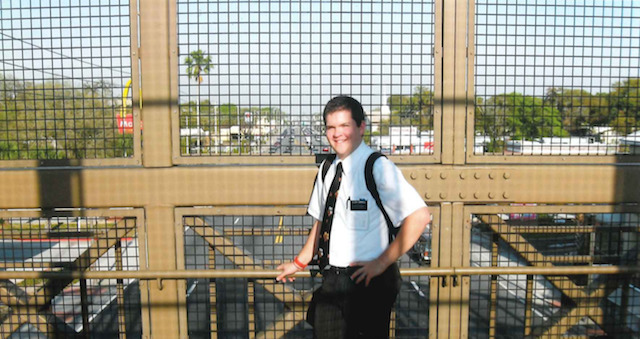 Listen: What Led an Inactive Teenager Who Didn't Want the Gospel in His Life to Become a Missionary

As Derek watched all the other missionaries milling about the Provo MTC, he felt like a fish out of water.

Just a few months ago, a mission was the furthest thing from his mind. In fact, the gospel, in general, wasn't in Derek's top interests. Hanging out with friends, planning his move to college—these were the things that had preoccupied most of his time.

"I had never planned on going on a mission or being involved in the gospel at all," Derek shares in a This Is the Gospel episode. "But instead, here I was."

This dose of gospel culture shock after going from an inactive teenager to a missionary for The Church of Jesus Christ of Latter-day Saints would help bring Derek closer to the Savior and a deeper testimony of the restored gospel.

Having grown up in a community with a large population of Latter-day Saints, Derek knew about but wasn't fully engaged in the gospel. He attended church every Sunday with his family "because it was the thing to do," Derek says, adding his family members were "punch-card members," punching in as they entered the chapel on Sunday and punching out as they left.

When Derek was 7, however, his father was injured while at work. That injury changed the lives of Derek's family in many ways, including limiting the mobility of the family as a whole. Gradually, Derek's family stopped doing a few of the things they used to, and one of those things was going to church.

By the time Derek graduated high school, his family was inactive. "Life was kind of going in neutral, if you will, but nothing was really happening," he says. "I always had the question in the back of my mind, 'What am I really doing with my life?'"

During this time, Derek was home when he heard a knock at the door. It was a man dressed in a suit and tie, an instant giveaway that a talk about reactivating the family might ensue.

But that wasn't the case. Instead, this man introduced himself as Derek's home teaching companion.

Initially, Derek wasn't interested, but the man left his phone number and said he would be in touch.

Then, one night, Derek received a text from his home teaching companion asking if he wanted to grab something to eat.

"I was usually out with my friends, but I was hungry. I'm always hungry, so I said, 'All right, that's fine. Let's do this,'" Derek remembers.

Derek says the dinner was the first time someone took the time to talk to him and get to know him instead of just trying to get him to go to the next event or Church activity.

The next month, Derek received another text from his home teaching companion asking if he wanted to visit a family in their ward.

As time went on, Derek accepted more and more invitations to visit his home teaching families and began to enjoy teaching them.

And one night, as his home teaching companion was dropping Derek off at his house, the two began talking about what Derek was doing with his life.

At the time, Derek had every reason not to serve a mission. He had a job, he had a girlfriend, and he was planning on going to college, and he told his home teaching companion all of this.

But after listening to Derek, his home teaching companion said the words that began to widen Derek's spiritual perspective.

"He said, 'You know what, college is a great, great thing, and I think you should stick with that,'" Derek says. "And then he said, 'But I really feel like you would do so well on a mission. You can touch people's hearts in a different way than anyone else. And if you go, there will be somebody that will need you.'"

This thought caught Derek off guard. In fact, it added a new weight to serving a mission, knowing someone out there could need him. Unsure of what to do, Derek remembered his mom. Even though his family was no longer active in the gospel, his mother would pray every night without fail. Derek knew this because there had been plenty of times when he had walked into her room to find her on her knees.

Wanting to give prayer a shot, Derek asked if God would guide him to read in the Book of Mormon where he could find the answer to whether he should serve a mission or not.

And as he prayed, Derek said he felt certain he needed to do something with his life, and that something was serve a mission.

When Derek's parents found out their son was planning on serving a mission, they were a little skeptical at first. But both embraced Derek's decision and supported him.

The next person Derek wanted to tell was his home teaching companion. While at a lunch, Derek broke the news.

"And I remember he just stopped eating his lunch," Derek says. "I think he dropped the fork, like actually physically dropped the fork. And he was like, 'You're lying to me. You're pulling my leg. This can't be real.' And I said, 'No, this is real.' And we started to cry together because this was something that he knew that I needed and that other people needed. And I knew that I needed it, too."

After telling his bishop that he was ready to serve a mission, Derek began going through the process of preparing to leave, including mission prep classes.

Even though he began taking the classes in the middle of the year, Derek felt like he was learning more about the gospel than he had ever learned before. But at the same time, Derek was worried that he didn't know enough to teach other people about the gospel.

While meeting with his bishop, Derek expressed his concern. The bishop recommended Derek read the talk "You Know Enough" by Elder Neil L. Andersen. Derek did and felt reassured that he, a recently reactivated member, could teach with power and knowledge as he worked to learn more about the gospel.

"So, for the next 60 days, I just prepared as much as I could, getting as much knowledge as I could, and I left for the MTC in August," Derek says.

If the MTC wasn't culture shock enough, Derek learned something during a practice lesson with his MTC companion that caught him completely off guard.

"I remember we were about to teach the first lesson, which talks about the Restoration of the Church," Derek says. "And I remember just reading over it and being like, 'Oh yeah, I got this. This is fine.' The Restoration, Joseph Smith, First Vision, lots of things I knew all that. And so I said my part and then my companion took over. He started to talk about the Book of Mormon and how the Book of Mormon was the writings of the ancient people here in America about Jesus Christ, and I looked over and I was like, 'Wait, what?'"

Previously, Derek had no idea that the Book of Mormon was an account of ancient people who came to the Americas. And the fact that he didn't know something so fundamental about the keystone of his religion left his confidence a little shaken.

And then there was a devotional where every missionary seemed to sing "Hope of Isreal" with such fervor and power "it was like they had known this since they were young," Derek says.

In comparison, Derek sat there in silence looking at these missionaries. "I knew at that point that this is definitely something I'm going to work on," he says.

And Derek did. During his mission, he read the full Book of Mormon cover to cover and felt for himself that it was true. Throughout his mission, Derek also held on to a quote from Elder Andersen's talk to help remind him he was doing the right thing:

"Nearly 40 years ago as I contemplated the challenge of a mission, I felt very inadequate and unprepared. I remember praying, 'Heavenly Father, how can I serve a mission when I know so little?' I believed in the Church, but I felt my spiritual knowledge was very limited. As I prayed, the feeling came: 'You don’t know everything, but you know enough!' That reassurance gave me the courage to take the next step into the mission field" (Elder Andersen, "You Know Enough").

"You know, when I first read this, I thought, 'Wow, what he was going through 40 years ago was the exact same thing that I was going through right now,'" Derek says. "That quote helped me to conquer all these feelings of inadequacy and lack of understanding."

Derek says that his mission taught him a lot about himself. And the feelings of culture shock and being a fish out of the water didn't matter in the end. What mattered was his willingness to do what he felt he had been asked to do and having the faith to keep going.

"Even though I didn't have all the lingo and all the knowledge of the gospel or all the songs memorized or any of that, my desire to serve the Lord and my desire to be a disciple of Jesus Christ was enough, and I'm so grateful for that," he says.

Listen to the full This Is the Gospel episode or read the transcript here.