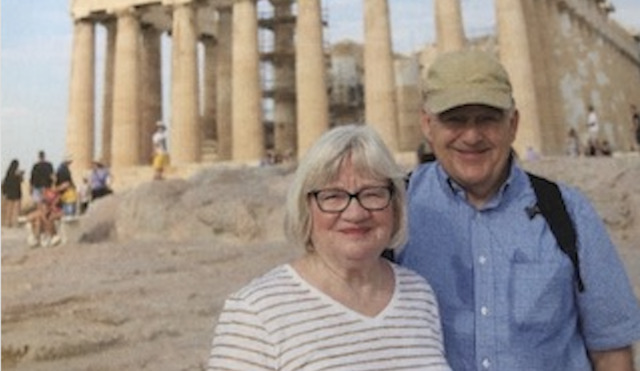 Listen: What One Woman Learned About the Power of Prayers Amid a Health Emergency in Greece

The first time Retta glimpsed the towering columns of the Parthenon and the sprawling, ancient limestone of the Acropolis in Athens, Greece, it took her breath away.

Though ancient Greek ruins were familiar to Retta through text and pictures, she never thought she would see weathered testaments to human ingenuity in person.

"I've been a high school and middle school theatre teacher for many, many years, so it was exciting to see all of the things I had been teaching all of those years," Retta shares in a This Is the Gospel podcast.

After hours of plane rides from the US to Greece then the hour-and-a-half bus ride from the airport, seeing the ancient ruins she had always longed to see was like a spiritual experience for Retta.

Quick to admit that she is not adventurous but loves travel, Retta says she always wanted to see the theatre of Dionysus, a prized jewel in the history of theatre, but Greece always seemed a little too far, a little too exotic and out of her comfort zone.

"So when my son called and said their friends had backed out on a trip that they had planned for Greece, my husband and I were up for it. A little nervous, but we thought it would be really fun," Retta says.

Though Retta had tried to learn Greek before she left for the trip, her efforts were mostly fruitless and she became increasingly aware of how little she could communicate with others outside her family in case of an emergency.

But while fulfilling this lifelong dream, something unexpected happened.

After only a few days on this trip with her husband, son, and daughter-in-law, Retta felt an ominous, familiar pain spread in her body. A pain that, in the past, had led to a hospital stay and surgery.

"I had some health issues a number of years ago, so I knew exactly where this was headed—that I was going to be very sick because it comes on pretty rapidly," Retta shares.

To make matters more complicated, the family was en route to their next stop: a small town in the middle of nowhere. And it became apparent as the family settled into their quaint, remote lodgings that Retta would soon need medical attention.

Though her husband didn't have any consecrated oil for a priesthood blessing of healing, he was able to offer Retta a blessing of comfort as they mapped out their options.

During this time of pain and uncertainty, Retta also felt a strong impression to do something she never would have under normal circumstances.

"As the pain increased, I felt a strong need to reach out to some of my friends and my niece to pray for me," Retta says. "Now, this is really unusual. This is not something I do. I feel really private about health issues. I know that Heavenly Father answers prayers for other people. I just didn't think this was something that I needed to ask for."

Even Retta's husband was shocked to find that she was texting friends and family and asking for prayers. "He gave me a strange look because he knew this was very, very unusual. I think he thought, 'Is it that bad?'" Retta says with a chuckle.

As she prepared for the possibility of heading home, Retta discovered all flights back to the US had layovers, some up to 20 hours. With the pain Retta was in, a 20-hour layover on top of a long journey home just wasn't an option. The only other choice was to drive to the small medical facility a half-hour away in the morning and pray that Retta and her family could explain the situation with their limited Greek.

After enduring the painful night, Retta and her family drove to the medical facility where they were surprised to find only three beds in an emergency room staffed by two doctors. Fortunately, Retta's family was able to communicate the problem to the doctors. But after some blood tests, it became apparent that Retta had a serious infection and would need to spend the night in the hospital.

"This was Saturday," Retta explains. "And we were supposed to fly out of Athens for Naxos the next day."

The doctors were horrified when Retta explained that she couldn't stay in the hospital overnight. If she stayed behind at the medical facility, there would be no way for Retta to get home. If her family stayed behind, the trip would be ruined for them as well. The long-awaited trip of a lifetime had suddenly turned into an inescapable nightmare.

"I was starting to panic," Retta says. "The pain was really, really severe at this point. It was nonstop; it didn't let up. I didn't know what I was going to do."

One doctor suggested that they admit Retta for the day, hook her up to an IV with strong antibiotics, and hope for the best.

It was a desperate situation, and this suggestion seemed like the only workable solution for Retta and her family.

Though concerned doctors tried to persuade Retta to stay at the hospital overnight, they released Retta after she stayed several hours receiving antibiotics through an IV. Resuming her trip with a dose of a strong painkiller and a prescription for more antibiotics, Retta and her family left for the Greek island of Naxos.

"That is the last pain I had," Retta remembers. "It was like a miracle because the doctor had told me I would not feel well . . . but the minute I left that hospital, I felt better. And I kept feeling better and better until the next morning I literally woke up and felt great."

When Retta and her family landed in Naxos the next morning, she texted her friends and niece and found out that not only had they prayed for her, but they had texted their extended families and asked for them to pray for her as well.

Her niece had also called and had Retta's name placed on the prayer roll in two different temples.

"Besides the blessing my husband gave me, I really felt like their prayers were answered," Retta says. "I guess that this was just a time where I needed to learn that, that sometimes you're in a situation where you need more than your faith."

Retta says she knew that Heavenly Father could have removed her pain long before she made the trip to the small medical facility in the middle of nowhere. He could have healed her before she texted her friends and family for help. He could have even stopped the pain from happening in the first place. But, "Sometimes Heavenly Father wants you to know that you can ask others to help you. And as uncomfortable as that may be, to ask other people to pray for you, sometimes maybe that is going to be your only solution," Retta says. "Sometimes, when you feel weakened and not strong enough, their prayers can get you through it."

Click here to listen to Retta's story on the This Is the Gospel podcast or read the transcript in the show notes on ldsliving.com/thisisthegospel. Retta's story begins at the 27:20 mark.