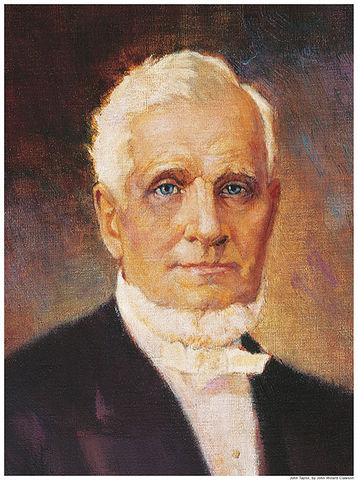 Purpose: To help family members recognize the importance of standing up for their beliefs and exercising faith in the Lord

John Taylor is often called the “Defender of the Faith,” a nickname he earned over and over again in his lifetime. Once, after first visiting Kirtland to meet the Prophet Joseph Smith, President Taylor heard some of the local members speaking negatively about the Prophet. John quickly defended the Prophet and told the members they needed to look to Joseph to follow the Lord, just as the children of Israel needed to follow Moses to get through the wilderness. Another time in Ohio, John Taylor courageously faced down an unfriendly congregation that planned to tar and feather him. Tearing open his vest, he boldly offered himself as their victim but when no one came forward, he began to preach the restored gospel to them. Later, some in the congregation apologized to him for their harmful intentions.

Print a copy of “Defenders of the Faith Word Find." As you search for the names of prophets, discuss how each acted in defense of his faith. For example, Daniel defended his faith by refusing to follow a law that said he could not pray. After finding all the prophets’ names, discuss ways family members may need to defend their beliefs in real life.

1. Lesson 13 of the manual Presidents of the Church discusses John Taylor as a “Defender of the Faith” (available at www.lds.org).

2. The story told in this lesson is available in cartoon format in the August 2003 Friend.

3. A puzzle of John Taylor to cut out and assemble is available in the February 1993 Friend.