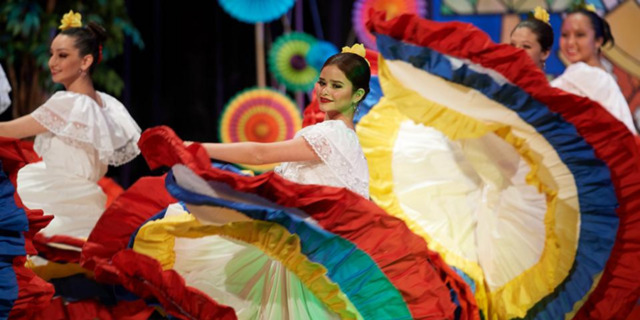 byNewsroom of The Church of Jesus Christ of Latter-day Saints | Oct. 28, 2020

The first of two virtual events showcasing Latino cultures from around the world has been held. The November 7 program featured a Hispanic virtual choir and video highlights from past events. This year’s theme is “Unidos en Esperanza” (United in Hope). To watch the program in Spanish or Portuguese click on the links below.

Due to COVID-19, the 2020 Luz de Las Naciones (Light of the Nations) cultural event will be digital. Two virtual events—one on November 7 and another on December 19—will showcase Latino cultures from across the world. Each event will highlight the shared heritage of and belief in the Lord Jesus Christ as the Light of the World among members of The Church of Jesus Christ of Latter-day Saints.

The November program begins at 7 p.m. MST and will feature a Hispanic virtual choir and video highlights from past events. The December event is also slated to start at 7 p.m. and will celebrate the birth of Jesus Christ. Both broadcasts will include a never-before-seen Luz de Las Naciones video of performances from the Conference Center on Temple Square in Salt Lake City.

Luz de Las Naciones events feature a cast of more than 1,000 Latino dancers, singers and other performers who are Latter-day Saints and friends of the faith.

“This year’s theme is ‘Unidos en Esperanza,’ or … ‘United in Hope,’” said Elder Jorge T. Becerra of the Seventy. “The program expresses our unwavering belief in the divinity of Jesus Christ. Many Latter-day Saints look forward to this annual celebration. We hope many will join us on these memorable evenings to once again enjoy Luz de Las Naciones.”

The broadcasts may be viewed at EsperanzaEnJesucristo.org

The roots of Luz de Las Naciones performances go back to the 1920s, when missionaries began preaching in Spanish among Mexicans living in Salt Lake City. Within a year, a mission was organized, and two years after that, a small Spanish-speaking congregation, called a branch, was created as families from Latin America and Spain immigrated to Salt Lake City. By 1960, this branch had grown and was known as the Lucero Ward (congregation).

From the beginning, Church leaders encouraged members of the Lucero Ward to develop their talents. Local leaders organized groups to help youth gain confidence in singing, dancing, and dramatic performance. One of these groups performed in the 1930 Church centennial celebration in the Tabernacle.

Dance and music programs helped these Latter-day Saints preserve their culture and pass on their language to the next generation. Other Latter-day Saint congregations in search of cultural entertainment for their social gatherings began requesting “Mexican Fiesta” entertainment at ward dinner parties. Ward members used these opportunities to raise funds for a new chapel.

In the 1950s, the Mexican branch youth produced a series of short plays and operettas, including “Luisa Fernanda, Los Bohemios.” The road show “Ritmo de Mexico” won a regional competition. The abundance of talent cultivated through these performances was passed on to succeeding generations and eventually helped produce what is now known as Luz de Las Naciones.

“The humble beginnings of this event reveal faith in action and a multiplying of talents,” Elder Becerra said. “Those pioneering efforts began in the early decades of the 20th century lit flames of faith for future generations, now bearing fruit in the event known as the Luz de Las Naciones.”