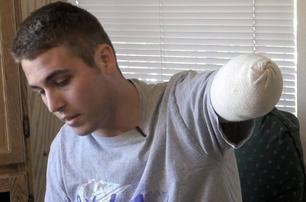 He's missing a piece of his leg, his arm was recently amputated and the tendons in his thumb were torn from pressing so hard on his attacker's eyeball, but Elder Paul Richard Oakey said he plans to move on from a day that two lions almost took his life.

"Accidents happen. We don't plan them. They just happen," said the 20-year-old whose humility is visible from across a room. "I wasn't planning on getting attacked by lions. It happened and I'm just going to move on."

Oakey said that a group of missionaries from an area he was serving in, in the Guatemala City South Mission for The Church of Jesus Christ of Latter-day Saints, decided to visit a zoo in the small mountain town of Esquipulas on July 11. The zoo, which charges an admission of five Quetzals (the equivalent of about 64 cents in the U.S.), boasts about a dozen different varieties of animals in cages at the top of a fairly steep hill that is accessible by a fairly lengthy hike.