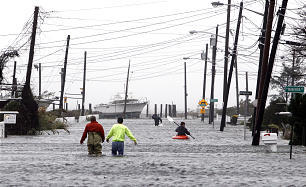 The Church of Jesus Christ of Latter-day Saints released the following statement:

"The Church continues to monitor the situation and is prepared to respond as needed. Prior to the storm, local leaders were in contact with Church members to encourage necessary preparations. Mission presidents are taking precautions to protect the safety and well-being of missionaries," said Scott Trotter, a Church spokesman.

"There will undoubtedly be some deaths that are caused by the intensity of this storm, by the floods, by the tidal surge, by the waves. The more responsibly citizens act, the fewer people will die," Maryland Governor Martin O'Malley told reporters, according to Reuters.

Some in affected areas are not heeding these warnings, according to interviews with local Church leaders.