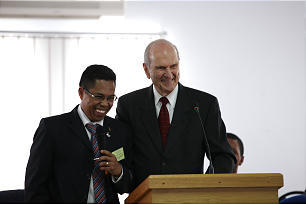 Ministry in Africa: Blessing the lives of the people

Elder Russell M. Nelson conducted a ministry in Africa from Oct. 21-30 that could be described as the fulfillment of scripture.

In the company of Elder Ronald A. Rasband of the Presidency of the Seventy and Bishop Richard C. Edgley of the Presiding Bishopric, Elder Nelson dedicated Malawi and visited several other countries in which he presided over area reviews, addressed priesthood leadership conferences and spoke to members in various meetings.

"During the trip, a scripture kept coming to mind," said Elder Rasband. "That scripture is found in Doctrine and Covenants 107:35: 'The Twelve being sent out, holding the keys, to open the door by the proclamation of the gospel of Jesus Christ. ...'