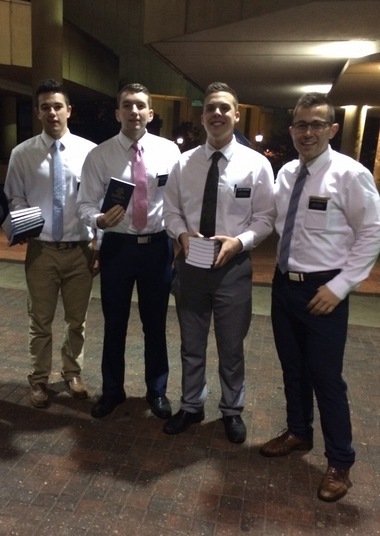 Although the Broadway musical comedy "The Book of Mormon" spoofs their faith, Alabama members of the Church of Jesus Christ of Latter-day Saints made the best of it during its six-day run in Birmingham that ended Sunday.

They assigned four missionaries to stand outside each performance at the Birmingham-Jefferson Convention Complex and hand out copies of the real Book of Mormon, one of their sacred scriptures, to people coming out of the show. There were at least four real Mormon missionaries on hand for each of the eight shows.

They distributed more than 2,400 copies of the real Book of Mormon in Birmingham, said Richard Hanks, Birmingham mission president for the Church of Jesus Christ of Latter-day Saints.

Read the rest of this story at al.com