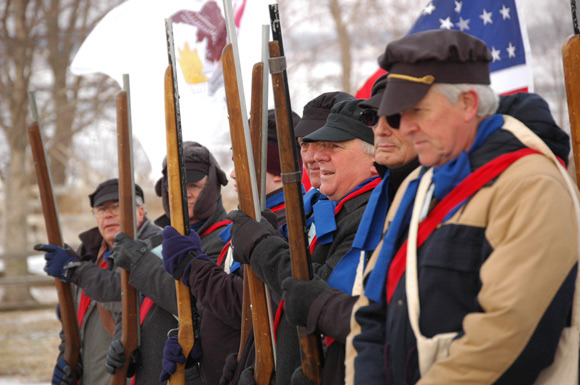 Bracing themselves against a stiff February wind blowing across the frozen Mississippi, modern-day descendants of the Latter-day Saints who were forced to cross the river in 1846 and others assembled in front of Nauvoo’s Cultural Hall on February 2 to commemorate what President Gordon B. Hinckley called “the exodus to greatness.”

When the commander of the color guard gave the order, senior missionaries, acting as a company of the Nauvoo Legion, led a procession of marchers wearing placards with the names of ancestors who actually crossed the plains, a carriage with Elder Al Christensen and his wife, Sister Doris Christensen, dressed as Brigham Young and wife Mary Ann, and horse-drawn wagons down Main Street to the Trail of Hope on Parley Street, which the commemorators followed to its end at the banks of the Mississippi.