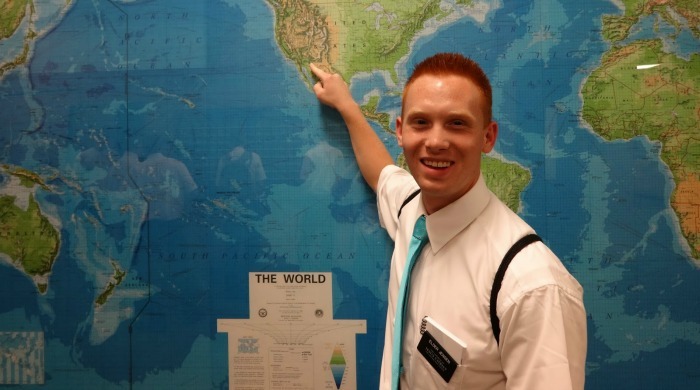 While serving in the Arizona Phoenix Mission, Elder Jensen placed a penny in his shoe to help him “Always Remember Christ.”

On February 13, 2014, Elder Jensen & Elder Linkogle were driving to their teaching appointment and were T-boned on the driver side, spun 3 times, and then broadsided again on the passenger side by a half-ton pickup before landing in a ravine. Though both missionaries came out alive, Elder Jensen’s skull fractures produced a blood clot, the size of a tennis ball that was increasing in size and placing pressure on his brain.

The Arizona Phoenix mission president, President Taylor, gave Elder Jensen a powerful priesthood blessing, promising a “full and quick recovery.” On Valentine’s morning, Elder Jensen had his head shaved prior to brain surgery to remove his blood clot and cauterize the bleeding around his brain. Elder Jensen’s surgery was successful, though it left a scar to write home about. His companion, Elder Linkogle, received a concussion, causing some temporary memory loss, but was released from the hospital, the next day (Valentine’s Day).

Read the rest of this story at ldsmissionaries.com