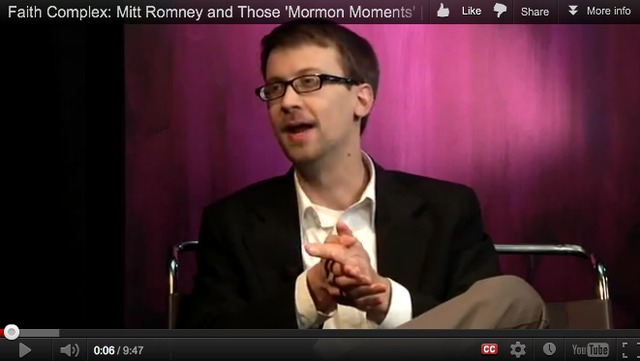 Mitt Romney and Those 'Mormon Moments'

From Donny and Marie Osmond, to HBO's "Big Love," to Proposition 8 in California, to persistent -- and inaccurate -- Beltway legends about how half of the CIA is staffed by members of the LDS Church, America's Mormons have a way of episodically popping into the national consciousness.

The recent ascent of Mitt Romney to the status of presumptive Republican nominee is no exception to this rule. It is yet another "Mormon moment" in a long string of such moments dating back to the 19th century.

In my conversation with Hampden-Sydney College professor Matthew Bowman (author of "The Mormon People: The Making of an American Faith"), we explore the possibility that Mormons themselves aren't necessarily the biggest fans of Mormon moments. The national scrutiny can be taxing and treacherous, especially for a community as family-oriented and averse to the spotlight as this one is.