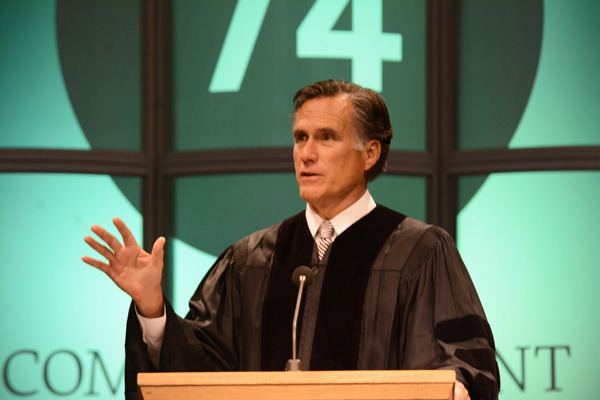 As the 5,341 UVU graduates celebrated the end of an era as college students, Romney discussed the unknown of their futures and encouraged them not to retreat into the world’s they knew as children, but instead to continue to move forward.

“The cozy little world of your childhood is long gone. You may be tempted to try to create for yourself that same kind of small and safe circle,” Romney said. “… Alternatively, you can live large by expanding your world and engaging in your world, constantly learning, nourishing friendships, overcoming reversals, and serving others. That is the road less traveled, and it will make all the difference.”

Before receiving an honorary degree from UVU along with the late Becky Lockhart and Pamela Atkinson, Romney shared six dimensions to “live a large life” and avoid defaulting to the smaller life from their childhood.

When Romney was in college, he said he focused on the classes and assumed he would never see his study group after graduation. Contradictorily, Romney says his six-person study group continues to get together 40 years later to celebrate their success and console each other in their lows.