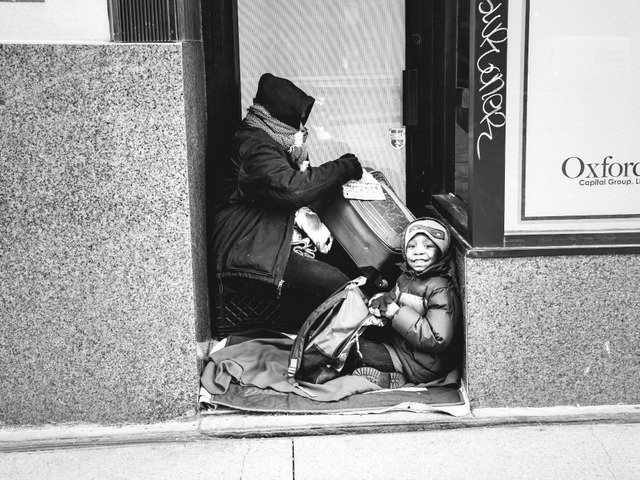 Mormon CEO Aaron Bludworth is gaining national attention for his photography. But he's not taking pictures of exotic landscapes or people in faraway countries. He's taking pictures of people living in poverty, and it's influencing people across the country.

Aaron Bludworth describes himself as a CEO, a father of five and a Mormon.

You’ll notice that bleeding-heart liberal is nowhere on the list. In fact Bludworth was a lifelong Republican until he left the party last year, and he still considers himself very much a conservative.

But Bludworth has spent countless hours over the past year taking thousands of photos that focus on people in need.

There’s his haunting photo of a little boy and his mom in Chicago featured above. The two were sitting in a doorway on a cold, winter day because they had nowhere to live.

It’s not exactly the kind of pastime you might expect from a CEO who travels the world for Fern, the Cincinnati-based marketing and tradeshow services company that he and his business partners bought in 2005. But there’s more to Bludworth than the assumptions people might make based on his home address and political beliefs. Bludworth argues there’s more to the people he photographs, too.

“Through the lens, I think you see things differently. And that’s really apparent with people more than other things,” he told me. “I think you start to recognize that there’s not just a common class of people who are in poverty. People are there from a bunch of different circumstances. And if you engage with people, they become a lot more personal than just a category.”

Read the rest of this story at WCPO.com