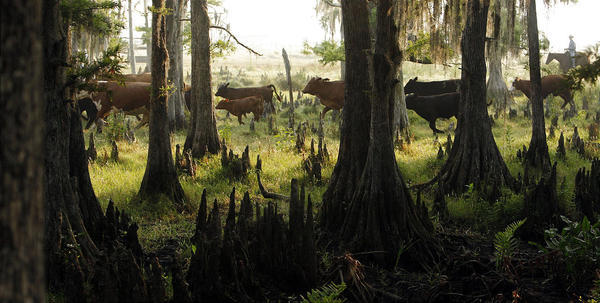 As the sun begins to make the day's first appearance, the cattle ranch already bustles with activity. A handful of cowboys saddle up quarter horses to move herds into new pastures, while others prep corrals and chutes for branding calves. Eagles and hawks look to circle the morning sky and share it with heron and cranes, while deer and rabbits make their way back to woodland edges, as do the wild hogs.

Meanwhile, massive tractors, graders and front loaders are lined up, to be used to reshape the land, while ranch airboats are primed for the waterways. Laborers prepare for the day's harvest in the citrus groves, while every mammal — including ranch hands and their dogs — will keep a wary eye out for nearby alligators.

Heron, airboats and gators — oh my! And, no, Dorothy, we're not only not in Kansas anymore, nor anywhere near the traditional cattle ranches of Texas or the Rocky Mountain West.

Welcome to Deseret Ranches, its nearly 300,000 acres spread over three counties in central-eastern Florida, tucked in between Orlando and Disney World to the northwest and the Kennedy Space Center and the state's Space Coast corridor to the east.