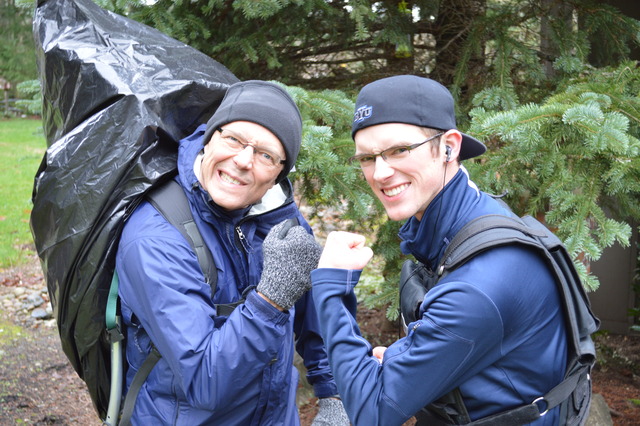 Mormon reality TV show contestants father Jim and son Austin Vach of Maple Valley, Washington, think they have what it takes to win on NBC’s new survival show, Get Out Alive with Bear Grylls. The show, hosted by renowned survivalist Bear Grylls, follows ten teams of two people through an arduous group expedition littered with orchestrated challenges across the wilds of New Zealand. It aired its pilot last week on July 8th.

For Austin and Jim, their journey first started with a failed Amazing Race audition back in May 2012. When Austin never heard back from the show, he assumed nothing would come of the attempt—until he was contacted several months later. “In November, I got an e-mail from one of the casting directors from this new show,” Austin recalls. “They’d come across my Amazing Race video on YouTube and thought it was fun, so they asked me to apply.”

Miraculously, the Vachs were chosen to compete in the month-long trip across New Zealand and immediately began training. Luckily, they were both already avid scouters, a fact which helped them countless times as they trekked across the wilds. “I got the nickname, ‘The Knot Guy,’” Austin recounts. “The funny thing was everybody thought I was just a genius when it came to knots and things, but really I just had three basic knots, and I used them in a variety of circumstances.” Being used to camping and being outdoors was also a big help.

But there was more to prepare for than just the physical trials. Austin and Jim also prepared spiritually. “One thing that my dad and I said going in was, we don’t want to do anything that we’ll be embarrassed for.” Jim also explains, “I felt at all times that we had to be an example because of who we are as members of the Church. We had to be good examples for everybody.”

That determination to embody the values of the Church even in such extreme circumstances is already being noted. Austin says he’s already been praised by fans for staying out of the drama and camp gossip.

As the challenges the Vachs face ramp up in the coming weeks, we can expect to see them and the other contestants continue to fight more demanding tests of their mettle. But more than praise their personal triumphs, the two men would rather have us watch and reflect. Austin asserts, “The takeaway that I would love people to get is who cares if something’s a long shot? If it’s something you want to do, then try it, and you never know when it will work out.” For Jim, it’s “not to say ‘no’ so quickly. When you’re faced with something that you think, ‘I’m too old for that kind of thing,’ as Austin tells me, your mind will age faster than your body will. I just need to go ahead and say, ‘Hey, I can do these things.’ And go out and do them.”

Cheer on Austin and Jim Mondays at 9pm Eastern, 8pm Central on NBC. They live tweet during each episode, so be sure to follow them @jimvach and @austinvach for more of their commentary on the show. Until then, get ready for next week’s adventure by catching up on the first two episodes of Get Out Alive with Bear Grylls at nbc.com/get-out-alive.