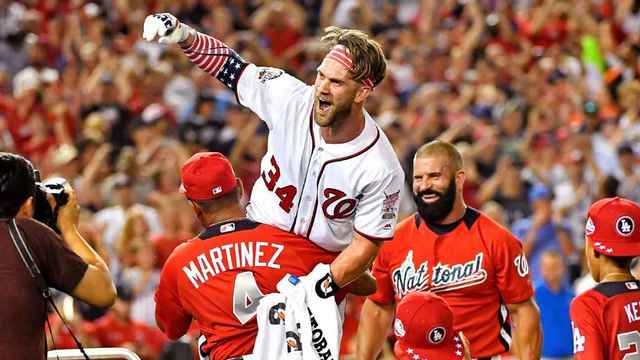 "It's unbelievable,'' LDS MLB player Bryce Harper said about his win at the Home Run Derby. "We have some of the best fans in baseball, and to be able to do that with my family out there, that's an incredible moment—not only for me, but for the organization and Nationals fans. I'm very blessed and humbled."

The 2018 Home Run Derby took on extra meaning for Harper, who participated in the event as a shoutout to the home crowd in what might be his final season in Washington. For sentimentalists, he brought along his father, Ron, as his designated Derby pitcher.

On the verge of an anticlimactic ending, the Harpers began a furious comeback with a nod and some family karma. Down 18-9 to Kyle Schwarber in the final round, Bryce went deep nine times in a span of 10 swings to tie it at the end of regulation. Then he drove the second pitch of bonus time over the fence in center field to win the thing, and all sorts of raw emotions came flooding to the surface.