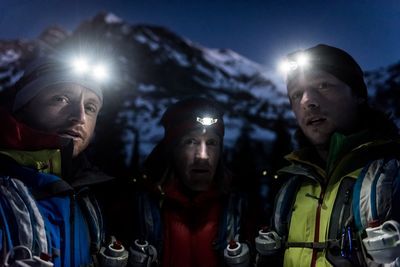 Beginning Sunday, April 5, weekend adventurer and Latter-day Saint Matt Galland, along with his adrenaline-fueled best buddies Danny Bryson and Blake Josephson, ventures to some of the most untouched pockets of the planet where cameras--let alone people--rarely have gone. In each of the eight episodes of 100 Miles from Nowhere, the goal is to trek roughly 100 miles in the wild in just four days to conquer Mother Nature’s challenges and capture her infinite beauty. While the mission is straightforward, each journey comes with its twists and turns, including dangerous encounters with wild animals, brutal terrain, invariable weather, extreme lows and almost impossible heights.

“No cameraman can keep up with us, which is why we must shoot everything ourselves,” says Matt, who with his pals, capture their adventures with GoPros and handy cams. Every single second on the ground is self-shot, providing a surprising sense of intimacy and immediacy of each unchartered step ahead.

While the guys describe each journey as a joyride, it’s never easy and not always fun. They burn up to 10,000 calories a day on foot, raft, skis and even skateboard while they face hunger, dehydration, fatigue, hypothermia, potential bone breaks and infighting.

“If it doesn’t hurt, it’s not worth it,” Matt says. He, Danny and Blake must band together, heavily relying on pre-arranged bear boxes, which are dropped at set points approximately every 25 miles. The bear boxes contain their favorite foods and much-needed supplies that replenish their strength and stamina. They serve as incentives to reach the next destination and refocus their unified intention.

“Matt, Danny, and Blake offer their fresh, unfiltered perspectives of the most remote places on Earth, allowing viewers to experience the planet through adventure, first-person footage and real emotions,” says Rick Holzman, executive vice president and general manager of Animal Planet. “100 Miles from Nowhere is a compelling story of our complex, challenging and rewarding relationship with the natural world around us.”