The LEGO temple took 5,500 LEGO pieces to build. Thompson used a LEGO computer-aided design program and artists' early depictions of the temple to create a blueprint for his project.

Thompson's model even has an angel Moroni on top, which Thompson created by painting a small LEGO figure with gold paint. He used a tiny flagpole to make the trumpet.

This isn't the first temple Thompson has built, nor is it the first time that LEGOs have been used to construct models of Christian relics. Thompson and his wife were married in the Twin Falls Idaho Temple. They displayed Thompson's Twin Falls LEGO temple at their wedding reception.

Back in 2015, a BYU exhibit display featured LDS temples and other religious scenes built out of LEGOs. The "Building Faith: Bricks of Religion" display included a 35,000 Lego model of the Salt Lake Temple created by Dave Jungheim, as well as scenes such as "The First Discussion" and "The Last Supper." Jungheim's project took him nine years to build and stands six feet tall.

Andrew H. Johnson has built four LEGO temples over the years—the Salt Lake, Nauvoo, Denver, and Washington D.C temples. His passion sprung from a construction project for his high school geometry class as a freshman, when he built a wooden model of the Salt Lake Temple. He found it was a great way to let his classmates know about his faith.

Sharing a similar love of building LEGOs, Samuel Mirejovsky created more than his Sunday School teacher was bargaining for when he created a four-foot by four-foot replica of the Bountiful Utah Temple for sharing time. His teacher, Amy Bergner, told the Deseret News that she'd only been expecting something that could fit inside a shoe-box when she asked him to build her a temple out of LEGOs.

So although Thompson's Meridian temple LEGO model isn't the first of its kind, the hours of creative energy are an impressive display of celebration for Idaho's fifth temple. If you're in the area, you can see the LEGO version at Bricks & Minifigs LEGO store at 10150 W. Fairview Ave, or the real version during the public open house beginning Oct. 21. 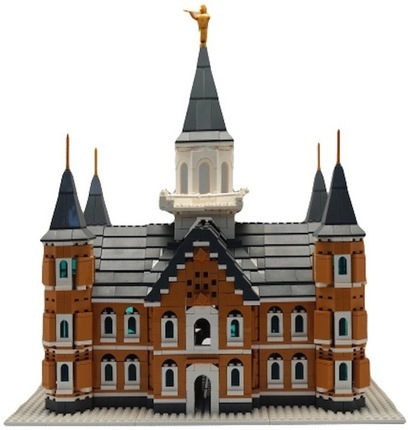 Want to build your own LEGO temple? Check out this 1,570 piece LEGO set for the Provo City Center Temple.