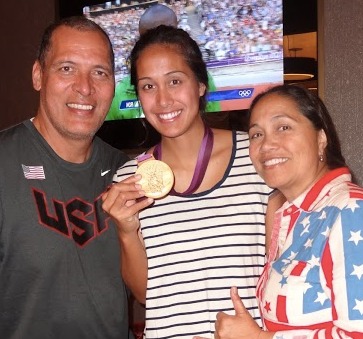 Tumua Anae was born in Hawaii and grew up in Newport Beach. She started her career playing high school water polo at Corona del Mar. Tumua won multiple national championships as USC’s goalie. She ended her career with the most saves in school history. Tumua joined the U.S. National Team in 2010, and was later selected to play in the 2012 London Olympics where she and her teammates won the gold medal. Tumua recently married Futi Tavana, former BYU volleyball standout and current member of the U.S.A. Volleyball Team. And yes, their kids will definitely be able to beat up your kids.

LJ: Can you tell me about the transition from being a collegiate athlete to a professional?

TT: After my senior season at USC, I was invited to play with the United States women’s national team. That’s when I committed to pursuing water polo professionally. I think that the decision to continue to pursue athletics is a tricky one. To many, it seems like an easy decision, but there are definitely things I wasn’t completely sure about. It came down to my love for sport. I wanted to become the best athlete that I could possibly be. I wanted to explore the potential to be great and I wanted to fulfill my childhood dream of representing my country.