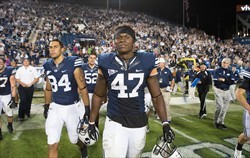 A member of the 2013 BYU graduating class, Ezekiel "Ziggy" Ansah wanted to march in next week's graduation exercises, but instead will be meeting his future team in New York City during the NFL draft, which is held on the same day.

Ansah came to BYU from Accra, Ghana, and having never played football asked the coach for a chance.

"We decided to let him go through a spring practice," says Mendenhall.

"I didn't know how to put on my pads; I had to have one of my teammates help me out," says Ansah.

The neophyte spent a lot of time on his back, but he wouldn't give up. "That's when he kind of captured my heart," says Mendenhall, "because he was resilient and because he kept getting up and kept coming back."

"I'm not sure that's ever happened in college football before," says Mendenhall.

Ansah will graduate with a degree in actuarial science, with a minor in business, something that means a great deal to him and to his family.

"BYU is always going to be in my heart," he says. "I didn't just come through BYU. BYU went through me."

Ansah came to BYU on an academic scholarship after joining The Church of Jesus Christ of Latter-day Saints in Ghana. He initially tried out for the BYU basketball team and was on the BYU track team before he walked into Coach Mendenhall's office and asked to play football.