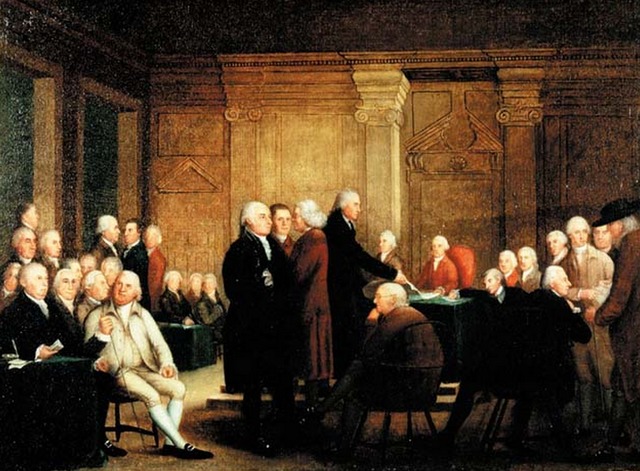 Mormons & America: An Inside Look at Their Troubled Past

Mormons in the nineteenth century knew the sting of misused power. A governor issued an extermination order against them. A President told them he could do nothing for them. An army marched against them to put down a non-existent rebellion. The Republican Party wanted to stomp out their “barbaric” practice of plural marriage. Congress confiscated their temples. The Supreme Court ruled against their religious freedom. Many of their leaders were thrown into jail.

While all these things didn’t happen at the same time, members of The Church of Jesus Christ of Latter-day Saints in the 1800s had plenty of reasons to mistrust the American Government. Mormons’ feelings toward the government were often complex and contradictory. They struggled reconciling the respect, even reverence they had for the Founding Fathers and the Constitution with what they felt was the oppressive persecution by those entrusted with upholding the Constitution.

Even before he joined the LDS Church, Wilford Woodruff admired the signers of the Declaration of Independence. In 1830, when the Church was organized, the Revolutionary War had officially ended only 47 years earlier.

To put that in comparative perspective for us today, World War II ended 70 years ago, the Korean War 62 years ago and the Vietnam War 40 years ago. The battle for independence was not a distant memory in 1830.

Mormons loved the idea of liberty. This is why they loved putting the symbol of liberty, the eagle, on their flags, seals, and perched upon beehives.

They also were able to identify closely with the Founding Fathers and soldiers that won the country’s freedom. Both the Mormons of 1876 and the Patriots of 1776 felt they had laws and magistrates thrust upon them without proper representation. Until they became a state, their freedoms would be dictated and truncated by political appointees.

Just before the centennial of the signing of the Declaration of Independence, Woodruff wrote in his journal about his feelings towards the country (original spelling maintained):

“This is the Commencement of the Centennial year of the American independance. At the Commencement of the Centaury 1776, and through the Revolutionary war the United States Government was Composed of an honest, industrious, Christian People, and the Leaders were pure true, virtueous, honest industrious Statesmen who labored hard to promote the interest, & welfare of the whole people, and to Establish a free Republican Government. This they did accomplish, and Esstablished laws and a Constitution which was a glorious Legacy to their posterity.

“But Jan. 1, 1876 finds a great Change has Come over the American Government. Virtue has departed from the Land, and Corruption occupies its place. Honesty has been driven from Evry department of Government from the presidential Chair, the Halls of Congress, from Evry Department of State, which has reached through Evry State and Territory Except Utah. . . . The seeds of Death and destruction are sown broad Cast throughout the american government, and are ripening for the Harvest."

A year later Woodruff was in St. George where Utah’s first temple had just been dedicated. At 10:00 in the morning on July 4, 1877, Woodruff and much of St. George gathered in the St. George Tabernacle to celebrate Independence Day. John D. T. McAllister read the Declaration of Independence, then Woodruff gave a keynote speech.

Learn more about this fascinating piece of Church history in Visions of Freedom: Wilford Woodruff and the Signers of the Declaration of Independence

Visions of Freedom will bring readers face-to-face with the signers of the Declaration of Independence, where they can look at the lives of the eminent men and remember not just the things they achieved in life but also their final request for true freedom as they came to a sleeping Apostle in a white temple among red rocks.

-->Get your copy of Visions of Freedom now

Woodruff prayed during the first dedication of the St. George Temple back in January 1877 that the nation would be broken in pieces, yet here they were, celebrating the birth of freedom and the Founding Fathers. The fact that the Saints could celebrate the founding of the United States while also looking for the country to be punished for its sins against them showed the conflicting feelings they had about the nation.

“They regard the States pretty much as the States regarded England after the War of Independence,” Sir Richard F. Burton wrote in his account of his visit to Salt Lake City in 1860. “Theirs is a deep and abiding resentment, which time will strengthen, not efface: the deeds of Missouri and Illinois will bear fruit for many and many a generation. The federal government, they say, has, so far from protecting their lives and property, left them to be burned out and driven away by the hands of a mob. . . . But, more galling still to human nature, whether of saint or sinner, they are despised, ‘treated, in fact, as nobodies’ — and that last of insults who can bear?”

But bear it they would — celebrating the promise of America and mourning its then apparent loss of the mandate of heaven.

When in 1877 the signers of the Declaration of Independence appeared to Woodruff on two successive nights, it signaled a message not only of the importance of the temple work they were demanding, but also a symbolic reconciliation with the country.

-->Read more about Wilford Woodruff’s work with the Founding Fathers

As time passed, particularly after the 1890 Manifesto ending the practice of plural marriage, the fact that the signers of the Declaration came to the Mormons established a connection to the founding of the nation. This was a reconciliation that bore fruit over time. Mormons, at least in the United States, saw themselves as not just Americans, but the most loyal of Americans.

The gradual engagement with American life grew over time. The pains of past persecutions and mistrust began to fade away. The mistrust between American Mormons and their country is gone — except, perhaps, for the same distrust the Founding Fathers hoped all Americans would perpetually maintain: the distrust of power.

Visions of Freedom: Wilford Woodruff and the Signers of the Declaration of Independence is by former Deseret News journalist Michael De Groote and photo historian Ronald L. Fox. It is available at Deseret Book in paperback, e-book, and audio book.

The book examines Woodruff’s vision and its impact on temple attitudes and practice and includes appendixes of all known accounts of his vision—including a possible forgery. The bulk of the book features biographies for each of the 56 Signers of the Declaration of Independence.

-->Get your copy now