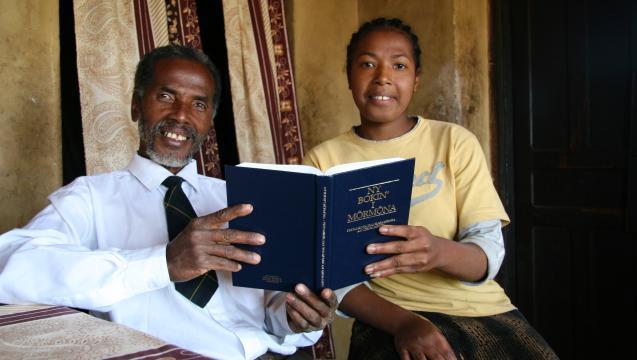 Mormons in Africa: Stories of Hope and Faith

A faith that began in upstate New York is taking its message to the four corners of the earth. With nearly 320,000 members, Africa is one of the fastest growing places in the world. Though the geography may be different, Church members in Africa and elsewhere are bound together by a devout belief in Jesus Christ that manifests itself in their lives.

Philibert Rasolo has spent years studying the Bible and searching for a meaningful religion to call his own. After 27 years of looking for a faith in his home of Madagascar, he became discouraged and vowed to end his quest. Instead, Philibert put all his energy into building a large brick house — three stories — much too large for his family that occupied only the top floor. Philibert said it would prove later to meet a need he had not yet imagined.

During that time, Philibert’s daughter Zarlice brought home an unusual religious book while on break from her studies at the university. At first Philibert was not dissuaded from his original vow to cease his search for religion, but he remembers being drawn toward the pages of the Book of Mormon. “I felt like the book was calling to me,” he remembered.