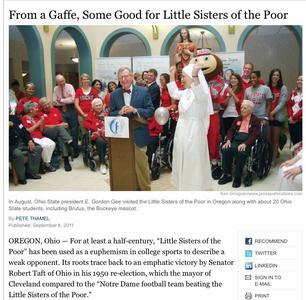 Mormons in Sports: Ohio State president does the right thing

An article in the New York Times on Thursday, Sept. 8, made me laugh out loud when I read it.

The story, written by reporter Pete Thamel, explains that in recent decades of college football, the euphemism, “Little Sisters of the Poor,” has been used to describe a super weak opponent.

Rewind to last year when Ohio State President, E. Gordon Gee, who also happens to be a Mormon, criticized Boise State and TCU’s strength of schedule by saying, “We do not play the Little Sister of the Poor.”

So imagine Gee’s surprise when he learned that Little Sisters of the Poor is actually a religious order. It was founded in 1839 with 2,700 sisters and 200 homes around the world, and is dedicated to helping the elderly poor. One of my favorite lines in the article reads, “After Gee removed his loafer from his molars, he called Sister Cecilia Sartorius, the mother superior, to apologize.”