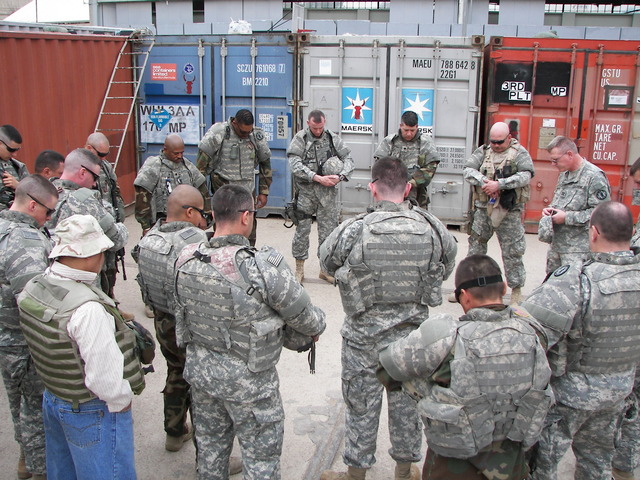 "And then the Spirit said, ‘And neither are you.’”

He awoke on the ground, surrounded by the Vietnamese and with three broken vertebrae. He wouldn’t see his home again for seven years.

Latter-day Saints have frequently forsaken their homes for foreign lands in order to serve their country, but through the distance and the trials, their faith has sustained them. There aren’t many people who know this better than Larry Chesley.

After his plane was shot down, he was immediately captured and stripped down. “Here I am, surrounded by the enemy, in my underwear and socks, and something inside of me said, ‘Larry, pray.’ . . . I said a very simple prayer: ‘Dear Father in Heaven, I may have to walk a long way, and I can’t do it without my boots.’ And within one minute, those boots were returned. The only thing I ever received back from the Vietnamese. I didn’t know what a great blessing it was to have those boots until later, when I’d seen men who’d walked into prison barefoot and what it had done to their feet.”

While a prisoner of war, Chesley experienced terrible conditions, little food, and severe illnesses—even losing a third of his body weight, dwindling to a mere 100 pounds. But he also experienced countless miracles amid the trials—during the seven years he was imprisoned by the Vietnamese, he was only tortured nine times; others were tortured three or even four hundred times. He relied on the gospel for comfort—especially his patriarchal blessing, which promised he would be watched over and would return home from serving in the armed forces. “I believe deeply in my religion,” Chesley says, knowing he was protected. “It was one of the strengths I clung to during those dark days.”

Larry Chesley on the day he returned to the U.S. after being released from 7 years as a POW in Vietnam.

But Chesley wasn’t the only one to experience miracles while serving in the military. With danger and destruction all around, many Latter-day Saint soldiers came face to face with death, sometimes escaping by only narrow margins. Bill Harrison, as a pilot in the marines during the Korean War, frequently encountered enemy fire while flying missions. One time after he came back from a bombing and strafing mission, a mechanic who was inspecting his plane told him he’d had a close call. “And I said, ‘What do you mean?’ And he pointed to a bullet hole that went through the cabin in the airplane about two inches behind my head.”

Bill Harrison being presented the Distinguished Flying Cross for heroism in flights against the enemy in Korea, 1952.

One time Henry McCain, who served as an Army chaplain in Iraq for two tours of duty and in Afghanistan for a third, had an IED (improvised explosive device, or roadside bomb) explode in the exact spot where he had been standing only minutes earlier. “Everyone in that vehicle turned around and goes, ‘Chaplain, the Lord’s looking out for you. We want you in our vehicle.’” But that wasn’t the only time: McCain repeatedly evaded disaster, living through more than a dozen attacks and ambushes. On three separate occasions, his vehicle was hit directly by an IED. Not only was he never injured, but no one who was traveling with him had ever been killed, either. That meant a lot, since, at the time, casualties were mounting, with a soldier wounded every three days and one getting killed every week. The soldiers valued his presence—and what they knew was protection from God—so much that if there were multiple vehicles going out together, they would request that he spend four hours in one vehicle, then four in the next, and so on.

Not all miracles came in such drastic manifestations, though. Some miracles came in the form of answers to prayer. Once while in Afghanistan, Rachael Neff, a military intelligence officer in the Army, received reports of a district center that had been overrun and a group of soldiers that was cut off from the base and under attack from insurgents. Tasked with the responsibility of analyzing reports to determine where rescue helicopters should be sent, Neff felt the weight of others’ lives on her shoulders; too far away meant the soldiers would have to fight their way to the helicopters, but too close and the helicopters might be headed straight into an ambush. With conflicting information, Neff was unsure what to do. With the clock ticking, she left her office and went down the hall to the bathroom. “I would just get on my knees and pray that I would be able to do my job and that because I would be able to do my job, people would be safe,” she says.

Rachael Neff while serving in Afghanistan.

Neff was prompted to go to division headquarters— skipping much of the chain of command, which is a big no-no—and ask them for assistance. She ran the entire way there. “This is all happening with the knowledge that people are literally fighting for their lives,” she says. “So it’s critical that you act quickly.” She explained her situation and asked them if they had anything that could help her confirm or deny the information. She was rejected. “I walked out of the office, and I went into the bathroom in division headquarters, I got on my knees again, and I prayed: ‘Why am I over here if the answer’s no?’ And I got the response, ‘Go back.’” Despite her previous rejection, she returned and persisted, offering other suggestions, and was able to gain their assistance so she could get the intelligence she needed. She again raced back to her office to work out a new plan and relay the information to her commander. Eight hours of fighting later, all the soldiers and pilots returned unharmed.

And, as is often the case in the lives of Latter-day Saints, many miracles occurred internally—in the hearts of the soldiers serving. Lloyd Richens had been inactive when he entered the service as a Navy electrician on the USS Intrepid during WWII, but he returned home with a strong testimony. “It was the Book of Mormon that did it,” he says. “We would get in a danger zone with suicide [bombers] coming after us, and we’d go eat in the chow hall and all the little Bibles would come out, all the little blue Testaments, and there’d be more religion there than you’d ever see any place else. And that’s what started me to thinking: just what are you going to do? I decided I’d better read the Book of Mormon and find out what it was all about. After I read that, I had no problem. . . . From not wanting to go to church, I started going to church because I wanted to, and that affected my whole life.”