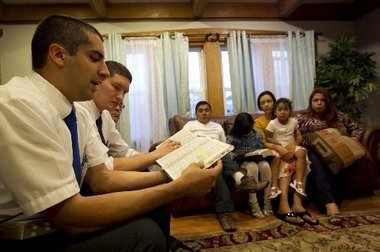 In New Jersey, Mormons have moved their prayer services and services from East Orange to Irvington, Maplewood, Short Hills and then Newark.

"We’ve been a bit of wanderers," said Curtis Carmack of Summit, president of the Scotch Plains stake, the Church of Jesus Christ of Latter-day Saints’ equivalent of a diocese.

Now they will have a place they can call home. The stake, which serves 3,800 members in Newark and other parts of Essex, Somerset, and Middlesex counties plus all of Union County, is poised to build its largest church in Newark. The white-steepled church at Orange and Burnet streets will also be Newark’s first Mormon meetinghouse, according to national and local church officials.
Read the rest of this story at nj.com