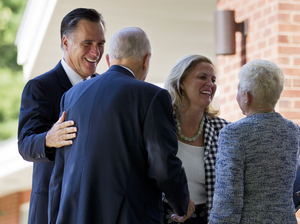 NPR: Both candidates leave God off the campaign trail

Religion used to be everywhere in the presidential elections. George W. Bush courted conservative believers in 2004. In 2008, Sarah Palin excited evangelicals and — unexpectedly — so did Barack Obama.

What a difference a few years make. In 2007, then-candidate Obama used evangelical language to describe his Christian conversion: He was a young, secular community organizer who occasionally visited the local Chicago church, when one day he walked to the front of the sanctuary and knelt before the cross.

"I felt I heard God's spirit beckoning me," Obama recalled. "I submitted myself to his will and dedicated myself to discovering his truths and carrying out his works."